A peak at the TiVo HME Rhapsody interface – available today 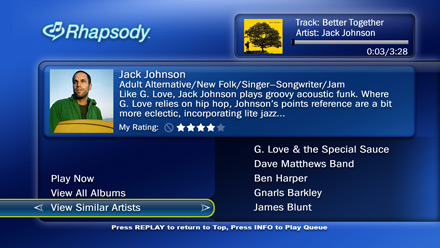 EngadgetHD managed to get a couple of screenshots of the forthcoming TiVo HME Rhapsody interface. It is nice to see this is making progress, and hopefully will be released soon. The partnership with Real Networks was originally announced at CES back in January, and it has been mentioned a couple of times since.

It is especially nice to see this coming to fruition, since TiVo’s first partnership with Real Networks, announced way back in 2001 along with the Series2, fizzled out. For those who weren’t following TiVo back then, when the Series2 was first announced TiVo announced three partnerships to bring network content to the unit – Real Networks for music and video, Radiance for movies, and JellyVision for games. That was long before TiVo acquired Strangeberry in 2004 and used their technology to develop Home Media Engine.

Edit: Well, as soon as I posted this I saw a post pop up on Gizmodo with more detail. This isn’t releasing soon, it is releasing now! Gizmodo has a slew of screenshots and an overview of the interface and usage. A bit of a mini-review. Both Gizmodo and the press release below say you can get more information, and sign up for a priority list to get this on your TiVo sooner, at http://www.tivo.com/rhapsody. However, it looks like that page isn’t up yet. Since the press release is dated the 9th (Tuesday), I would expect the page to be up sometime later today.

And, as I type, CNet just posted an article on this.

ALVISO, Calif. / SEATTLE- October 9, 2007 – TiVo Inc. (NASDAQ: TIVO), the creator of and leader in television services for digital video recorders (DVRs), and Rhapsody®, the leading digital music service, today announced they have made available a transformative way for consumers to experience digital music in the home by delivering instant access to the Rhapsody music service through any broadband-connected TiVo box.

This groundbreaking combination puts millions of songs and thousands of Internet radio stations at consumers’ fingertips from the comfort of their living room, cementing TiVo’s status as the undisputed universal home entertainment center. TiVo subscribers can easily search for music directly from their TiVo box and instantly play anything from Rhapsody’s extensive music catalog of over four million songs using TiVo’s intuitive remote control and Emmy® award-winning user interface.

“By adding music to our portfolio of broadband offerings, TiVo is the only universal entertainment provider in the living room,” said Tom Rogers, CEO and President of TiVo. “Since the beginning, TiVo has been focused on the principle of choice and control, giving our users the ability to experience TV on their terms. Together, TiVo and Rhapsody have extended the personal viewing experience on TiVo into music, providing consumers with an incredibly easy way to access their favorite artists from their television set. Our customers can not only navigate through hundreds of TV channels and thousands of movie downloads, they now have access to millions of songs all on their television set.”

“We’re thrilled to bring Rhapsody into the heart of the living room with TiVo,” said Rob Glaser, chairman and CEO, RealNetworks, which in partnership with MTV Networks, owns and operates Rhapsody. “By partnering with TiVo, we can now give consumers easy and unlimited access to Rhapsody’s library of four million songs from the comfort of their sofa. This is another important step as we fulfill our mission of bringing Rhapsody to consumers whenever and wherever they want it.”

“Rhapsody on TiVo gives music fans a cool new way to connect with the music and the artists they love,” said Michael Bloom, GM and head of Rhapsody America. “The combination brings Rhapsody alive as a social music experience in the home, and gives a whole new meaning to the term ‘house DJ.’”

Among other capabilities, consumers can search for music directly from their TV using TiVo’s intuitive search feature, browse charts of Rhapsody’s most popular, artists, albums and songs, check out weekly lists of new releases, or listen to thousands of radio stations that suit virtually any mood. TiVo users can also use the famous peanut remote’s Thumbs Up™ and Thumbs Down™ buttons to rate their favorite music. Rhapsody provides consumers with music recommendations based on their ratings, personal music tastes and listening habits.

The launch of Rhapsody on TiVo represents a fundamental leap forward in making Rhapsody accessible anywhere consumers want to enjoy music — on the computer, portable music device and mobile phone, and now through the television. The addition of music also adds to the diverse array of entertainment options for TiVo customers, joining movie downloads from Amazon, online content from sources such as The New York Times and The Onion, and the ability to share home movies through One True Media.

To celebrate the launch of this new service, TiVo subscribers have access to a free 30-day trial of Rhapsody. Consumers can choose to continue their Rhapsody service beyond the trial period for $12.99 per month. Current Rhapsody subscribers who have broadband connected TiVo DVRs can access their existing Rhapsody music libraries (including artists, albums, playlists and channels) via their television at no extra charge. Subscribers can learn more about Rhapsody on TiVo and sign-up for the priority list found at www.TiVo.com/rhapsody to ensure that the Rhapsody update is delivered to their TiVo boxes as soon as possible.

Details on the Rhapsody music service can be found at www.rhapsody.com. The new TiVo HD and other TiVo DVRs are available at leading consumer electronic retailers including Best Buy, Circuit City and Amazon.com. See www.TiVo.com for details.

MegaZone is the Editor of Gizmo Lovers and the chief contributor. He's been online since 1989 and active in several generations of 'social media' - mailing lists, USENet groups, web forums, and since 2003, blogging.    MegaZone has a presence on several social platforms: Google+ / Facebook / Twitter / LinkedIn / LiveJournal / Web.    You can also follow Gizmo Lovers on other sites: Blog / Google+ / Facebook / Twitter.
View all posts by MegaZone →
This entry was posted in Press Release, TiVo. Bookmark the permalink.
Performance Optimization WordPress Plugins by W3 EDGE