Posted on Thursday, September 11, 2008 by MegaZone 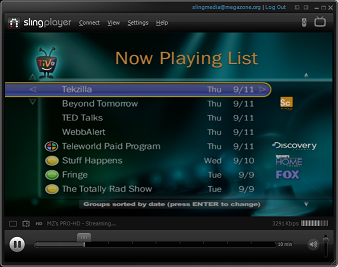 TiVo users, including myself, were surprised to find a recording in their Now Playing List called ‘Teleworld Paid Program’, with four color icon that hasn’t been seen before. See the screen capture above, and click on it for a larger version. (Yes, that’s my TiVo captured via SlingPlayer.) Some people were upset by this, wondering why their TiVo was recording paid programming. Others were just baffled by it.

So, first of all, what is the Teleworld Paid Program? You know the videos used in Showcases, promotions, interactive ads, etc, on the TiVo? Teleworld Paid Program is how TiVo gets those video clips on the box. TiVo buys several broadcast slots a week on various cable channels and broadcasts this special program. If you watch one of these you’ll see it is made up of short segments one after another. The broadcast contains flags to mark the segments, and the TiVo slices and dices the signal recording into the multiple bits and links them to the proper item on the TiVo.

As for the name, TiVo was originally named Teleworld when the company was founded. They changed the name to TiVo later. I guess using it for this is a little nod to the early days. Teleworld Paid Program has been around for many years, but most users never become aware of it.

So why is it showing up in the Now Playing List now? Well, clearly something went wrong. The broadcast was recorded as it normally is, but it wasn’t hidden from the user as it is supposed to be. The new icon must be something TiVo had in the system for their special broadcasts, probably to help engineers recognize them. (There used to be a back door whereby you could make the hidden recordings show up in the NPL, I bet it is still in there for developers.)

So, in short, this looks like a glitch. I’m sure TiVo will work to correct this. It isn’t some bizarre new way to push advertising on the users, and users shouldn’t waste their time trying to figure out why it recorded or try to prevent it. Just delete them and give TiVo a little time to fix the issue.

UPDATE: TiVoPony has confirmed that it was a glitch:

Hey guys, we’re very much aware of this and it was just a one time glitch. Very sorry about it, you may delete that recording!

The team is off now to tweak the processes in place so that this doesn’t happen again.

MegaZone is the Editor of Gizmo Lovers and the chief contributor. He's been online since 1989 and active in several generations of 'social media' - mailing lists, USENet groups, web forums, and since 2003, blogging.    MegaZone has a presence on several social platforms: Google+ / Facebook / Twitter / LinkedIn / LiveJournal / Web.    You can also follow Gizmo Lovers on other sites: Blog / Google+ / Facebook / Twitter.
View all posts by MegaZone →
This entry was posted in TiVo and tagged Teleworld Paid Program, TiVo, TiVoCommunity. Bookmark the permalink.
Performance Optimization WordPress Plugins by W3 EDGE