For as long as I can remember part of the TiVo UI is that a fourth press on the Fast-Forward or Rewind button takes you back to Play. That is until the 14.9 update hit the TiVo Premiere family. Now each of three presses increases the speed, but the fourth press gets you the dreaded error ‘Bonk!’. You have to press Play to return to normal playback, or press the opposite button an equal number of times to step back down. (If you pressed FF 3x, press RW 3x.) This change doesn’t bother me very much because I really don’t use FF/RW that often. I’m a 30-second-skip fan myself, when it comes to jumping through commercial breaks. I’ve seen a small but growing number of complaints about this change on TiVo Community, Facebook, and other TiVo-related online communities from those who miss the old behavior.

Unfortunately it sounds like it is hear to stay. It wasn’t meant to be included in 14.9, but it is a deliberate change TiVo is making, according to Margret Schmidt, TiVo’s Vice President, User Experience, on Twitter. 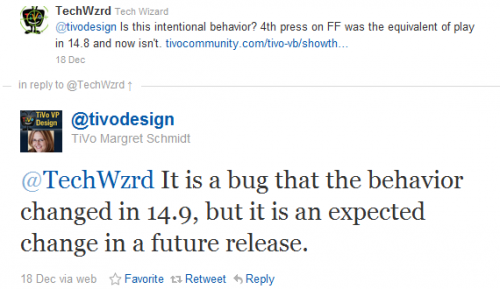 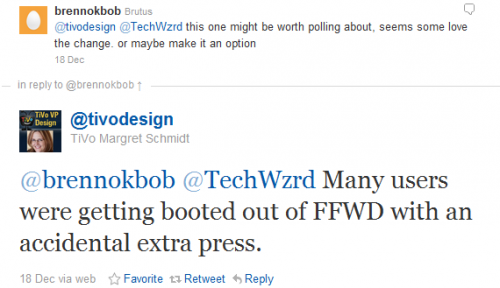 So some users were accidentally exiting out of FF/RW with the extra press. OK, I can see that. But it isn’t that hard to adapt and learn not to do that. Changing a long-standing behavior is disruptive to existing users, was this really a big enough problem to justify that? If so, how about adding a toggle to the settings just as was done for the changes in behavior for the Advance button? Default it to the new behavior but allow users to keep the old behavior if that’s what they prefer.

Yes, I know, “Big deal” I hear you say. So now you have to move your thumb a half an inch and hit Play instead of FF again. For someone who has been using TiVo for a while it is muscle memory now. And it is hard to overcome the established behavior. I expect there will be a lot of Badoop, Badoop, Badoop, Bonk “Dammit!” Badoop in homes of experienced users.

MegaZone is the Editor of Gizmo Lovers and the chief contributor. He's been online since 1989 and active in several generations of 'social media' - mailing lists, USENet groups, web forums, and since 2003, blogging.    MegaZone has a presence on several social platforms: Google+ / Facebook / Twitter / LinkedIn / LiveJournal / Web.    You can also follow Gizmo Lovers on other sites: Blog / Google+ / Facebook / Twitter.
View all posts by MegaZone →
This entry was posted in DVR, TiVo and tagged TiVo, Twitter. Bookmark the permalink.
Performance Optimization WordPress Plugins by W3 EDGE