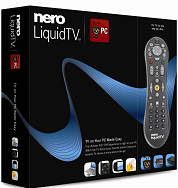 I’ve saved the best for last, not that Nero Move it and Nero 9 aren’t great products, but this is the one I’m most excited about – Nero LiquidTV | TiVo PC! LiquidTV | TiVo PC (henceforth just LiquidTV to keep it simple) is the culmination of the TiVo-Nero partnership announced last November, and reconfirmed this June. It brings the TiVo experience to your Windows XP or Windows Vista PC.

It turns your PC into a TiVo DVR with a user experience very similar to that of a standalone TiVo. Based on the web conference Nero held last Friday, and the press packet images, I suspect the software may be based on the codebase developed for the Comcast cable software. It has a similar look and feel and some of the features previously unique to the OCAP/tru2way software, such as PIP video in the menus. But it goes beyond the capabilities of the standalone TiVo, since it is on the PC, by allowing you to easily burn DVDs of the content or easily transcode and transfer content to your portable devices. Users familiar with the TiVo interface will have no trouble using LiquidTV, in fact the retail box comes with a TiVo peanut remote.

There are two versions of the product, a downloadable software-only version for $99.99, which includes one year of TiVo service. Or a retail box with hardware for $199.99, which also includes one year of TiVo service. The service is $99.99 per year after the first year, and you can try the download free for 30-days before buying. It will launch in the US, Canada, and Mexico on October 15, 2008. Availability in other areas of the world isn’t mentioned, but it must be coming – and that’s not just a guess, one of the images in the press kit was of a DVB-T antenna for the retail product. Only DVB-T isn’t used in the US, Canada, or Mexico, so I suspect that was a little ‘oops’ and it is for a version destined for other countries.

EDIT: Ah, here’s a confirmation from an article in the NZ Herald:

Joshua Danovitz, vice president and general manager of international business at TiVo, said the plan is to launch it in Europe next year, including in Nero’s home country, Germany. Britain is the only European country where TiVo currently has subscribers.

The hardware included in the retail box includes a TiVo peanut remote, an IR blaster transceiver, and a USB TV tuner card. The tuner is a Hauppauge HVR-950Q which supports NTSC analog and ATSC digital signals from antenna, analog cable, and clear QAM digital cable. Nero also says they support all USB, PCI, and PCIe TV Tuner cards and a list of all confirmed tested cards will be posted on their website. It will also work with capture cards fed by external cable boxes or satellite receivers, though it only supports one set-top box amongst the four tuners.

The remote looks like it is based off of the peanut that came with the Humax and Toshiba Series2 DVD-RW combo units, with DVD controls and a stop button in place of the DVR 1-2 slider found on non-DVD peanuts. Which makes sense as LiquidTV does have disc playback features. I do wish they offered some kind of remote-only hardware bundle for those who already have tuner cards but would like the remote to use with the product.

LiquidTV goes beyond standalone TiVo units in other ways as well. It supports up to four tuners, twice as many as an existing TiVo, and recording time is limited only by your hard drive capacity. Want more time? Just add more capacity to the PC. CableCARD support has not been tested, but on the conference with Nero Friday they said it should probably work if installed on a Windows Media Center PC with CableCARD support. I’d love to hear from anyone who tries that as to how it goes.

LiquidTV has all of the features you’d expect from a TiVo product – Season Passes, WishLists, TiVo Suggestions, Trick Play, and KidZone. Online scheduling is also available, just as with with standalone units. Being on a PC there are options from within the program menus to save a show to a portable device like an iPod or PSP, to burn it to DVD, or to save it to an archive format (H.264) to save space.

There are also some new additions to the Now Playing list – category folders. Standalone TiVo users are probably familiar with the TiVo Suggestions folder, and perhaps the HD Recordings folder, but LiquidTV also adds folders for Movies, Sports, and Kids content.

But LiquidTV has another fantastic trick up its sleeve. Avoiding one of the worst mistakes ReplayTV made with their PC software, LiquidTV | TiVo PC will communicate with standalone TiVo units on your network! You can transfer content between a PC running LiquidTV and a standalone TiVo using Multi-Room Viewing, just as you can between standalone units on a network. The TiVos show up in LiquidTV’s Now Playing List, and vice-versa. So it really is like having another TiVo on your network.

There are a number of official screenshots from the press kit:

I also took a few screen captures of my own during the web conference Friday:

I’m hoping to get a review copy to try on my new laptop to give you some first hand impressions. From what I’ve seen in the press packet and the presentation last Friday, I think Nero and TiVo have done a great job creating a first rate PC DVR software package. And the iconic TiVo remote is a nice touch. It is a nice alternative to MCE, SageTV, or BeyondTV. The one thing I’m not that happy with is the subscription pricing of $99.99 a year. That’s the same as yearly MSD for a standalone TiVo, but the standalone units have features, such as TiVoCast and HME, not to mention official CableCARD support, which LiquidTV lacks. And there is clearly no hardware subsidy to cover. $100 for the software the first year seems fair to me, but for additional years I’d like to see them drop the fees a bit. But that’s a minor issue I think. This could really open up global markets for TiVo, as users bring their own PC and all that’s really required is an EPG source for a new territory.


Nero and TiVo Deliver the Ultimate DVR Experience on the PC

“In recent years the amount of digital entertainment content available to average consumers has exploded,” said Bruce McGregor, senior analyst, Digital Home Services for Current Analysis. “Consumers have increasingly conformed to using mobile devices and the PC as sources of video entertainment; as a result they are looking for ways to port their favorite television content onto multiple mobile formats. There is an emerging opportunity for a PC-based DVR service that offers easy access to television content on a wide variety of devices.”

With Nero LiquidTV | TiVo PC, consumers can watch and pause live TV on their desktop, record their favorite shows directly to their hard drive, transfer shows between computers throughout the home, or enjoy their favorite shows on-the-go by exporting them to iPod®, PlayStation® Portable (PSP®), or burning them to DVD. Now the TiVo experience can be enjoyed on the PC, including TiVo features like WishList® searches, Season Pass® recordings, TiVo KidZone, and TiVo Suggestions.

“For more than a decade, the world’s largest mobile and consumer electronics brands have trusted Nero for technology leadership and category creation,” said Udo Eberlein, CEO, Nero AG. “Now, with Nero LiquidTV | TiVo PC, we are providing a next-generation DVR application that integrates the renowned TiVo service with the PC. This solution is truly a platform on which our vision for liquid media – where content can be easily accessed anytime, anywhere, and on any device — will become a reality.”

Nero LiquidTV | TiVo PC is designed for ease of use. No technical expertise is required to install the software on any PC with the Windows XP or Windows Vista operating system. The full retail solution comes complete with everything that the consumer needs to share the TV experience throughout their digital home: a TiVo PC remote; a TV tuner card to allow television signals to be received by the PC; and an IR Blaster to create a wireless, infrared connection between the cable or satellite box and the PC. It also comes with a one-year subscription to the award-winning TiVo service, which automatically finds and digitally records a user’s favorite shows.

“Nero has done a superb job of bringing the TiVo experience to the PC, and have done so in a way that lives up to the rich TiVo legacy,” said Tom Rogers, CEO and President, TiVo. “To be able to extend the features of TiVo to a new platform without compromising the integrity of what has made TiVo such a revolutionary product is a significant achievement, one we know both new and old fans of TiVo will love.”

Nero LiquidTV | TiVo PC with one year of TiVo service will be available in the U.S., Canada and Mexico in October 2008 with a suggested retail price of $199 USD for a retail box or $99 USD for a downloadable software-only version. TiVo service subscription renewal is on an annual basis at $99 a year. The retail box, containing a tuner card, TiVo remote control and IR blaster, will be available at participating retailers in the U.S. and Canada. The software-only version will be available for download to the U.S. Canada and Mexico online at www.nero.com.

Nero, the creator of liquid media technology, enables liquid content creation and distribution anytime, anywhere, and on any device. The company provides consumers with the freedom to simply enjoy their music, photos, and videos, regardless of hardware or file format, by taking a unique platform neutral, standards-based approach to solution development. More than 300 million units of Nero’s trusted software solutions are used in the home, on the go, and professionally. Nero also provides strategic partners with cutting-edge applications, codecs, tools, software development kits, and programming interfaces for use with a variety of the latest platforms and devices. Products are available globally through hardware manufacturers, international partners, retailers, and directly through the Nero Online Shop at www.nero.com.

Founded in 1997, TiVo (Nasdaq: TIVO) pioneered a brand new category of products with the development of the first commercially available digital video recorder (DVR). Sold through leading consumer electronic retailers and TiVo.com, TiVo has developed a brand which resonates boldly with consumers as providing a superior television experience. Through agreements with leading satellite and cable providers, TiVo also integrates its DVR service features into the set-top boxes of mass distributors. TiVo’s DVR functionality and ease of use, with such features as Season Pass™ recordings and WishList® searches and TiVo KidZone, have elevated its popularity among consumers and have created a whole new way for viewers to watch television. With a continued investment in its patented technologies, TiVo is revolutionizing the way consumers watch and access home entertainment. Rapidly becoming the focal point of the digital living room, TiVo’s DVR is at the center of experiencing new forms of content on the TV, such as broadband delivered video, music, and photos. With innovative features, such as TiVoToGo™ transfers and online scheduling, TiVo is expanding the notion of consumers experiencing “TiVo, TV your way.®” The TiVo® service is also at the forefront of providing innovative marketing solutions for the television industry, including a unique platform for advertisers and audience research measurement.

Nero® is a trademark of Nero AG and its subsidiaries. Any other product names are trademarks or registered trademarks of their respective owners. © 2008 Nero. All rights reserved.