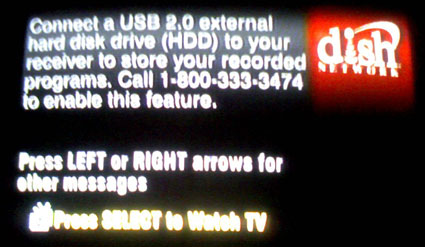 ZatzNotFunny reported that Dish Network has now enabled the USB 2.0 port their ViP622 DVR. The Ethernet port is also being enabled as part of the software update. Users can now connect USB 2.0 external hard drives to their DVRs to expand the storage capacity, and use the Ethernet port for the calls home instead of the modem. However, there is a catch – there is a $39.99 activation fee to enable the USB ports.

MegaZone is the Editor of Gizmo Lovers and the chief contributor. He's been online since 1989 and active in several generations of 'social media' - mailing lists, USENet groups, web forums, and since 2003, blogging.    MegaZone has a presence on several social platforms: Google+ / Facebook / Twitter / LinkedIn / LiveJournal / Web.    You can also follow Gizmo Lovers on other sites: Blog / Google+ / Facebook / Twitter.
View all posts by MegaZone →
This entry was posted in Dish Network, DVR. Bookmark the permalink.
Performance Optimization WordPress Plugins by W3 EDGE