Buildings And Bridges Are Made To Bend In The Wind 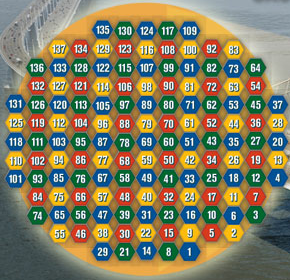 What’s that image? That’s a cross section of the main suspension cable for the new Self Anchored Span (SAS) on the new San Francisco – Oakland Bay Bridge. The SAS main cable is made up of 137 individually pulled segments, a total of over 17,000 individual wires. And they just completed the stringing operation, a month early:

I love this kind of thing; I’m addicted to shows like Build It Bigger, World’s Toughest Fixes, Big, Bigger, Biggest, etc. I own a few books on Boston’s Big Dig and other such projects. There have already been episodes on the new Bay Bridge, and I’m sure there will be more once it is completed. Anything with extreme engineering. (Yes, I watched all of Extreme Engineering too.)

MegaZone is the Editor of Gizmo Lovers and the chief contributor. He's been online since 1989 and active in several generations of 'social media' - mailing lists, USENet groups, web forums, and since 2003, blogging.    MegaZone has a presence on several social platforms: Google+ / Facebook / Twitter / LinkedIn / LiveJournal / Web.    You can also follow Gizmo Lovers on other sites: Blog / Google+ / Facebook / Twitter.
View all posts by MegaZone →
This entry was posted in General and tagged Bay Bridge, Video, YouTube. Bookmark the permalink.
Performance Optimization WordPress Plugins by W3 EDGE