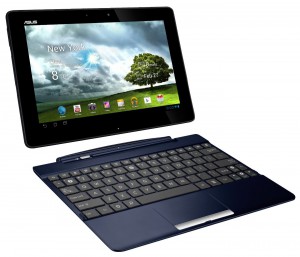 Announced back in February, ASUS has launched their new mid-range Android tablet, the Transformer Pad TF300. It slots into their range between the original Transformer and the Transformer Prime. Like all Transformer models there is an optional keyboard dock that effectively turns it into an Android netbook.

While the TF300 is currently only available with WiFi, it will also eventually come in HSPA+ & LTE versions. Battery life is 10 hours, 15 with the dock – down from 12/18 on the TF201. And it is physically slightly larger. But it also has a $399.99 MSRP for the 32GB model, $100 less than the Transformer Prime. However, with the TF201 available for less than the MSRP, while the TF300, being new, isn’t available at much of a discount, the gap is currently smaller. It isn’t a clear choice – do you get the TF300 with most of the features and save a little, or go for the slicker TF201 with all of the features for just a bit more?