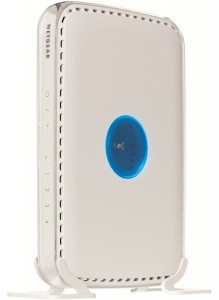 If you need a dirt cheap 802.11n router, today’s Amazon Gold Box Deal of the Day is for you. They’re offering the Netgear RangeMax N150 Wireless Router WPN824N for only $30.00. This may not be the fastest 11n router, or the most feature rich, but it is a good basic 11n router if that’s what you need. It is single-band, 2.4GHz, and as the name implies it supports 11n speeds up to 150Mbps. It also supports 802.11b/g devices if you still have some of those.

It isn’t the biggest, baddest router on the market, that’s for sure, but for $30 it is a solid product.

MegaZone is the Editor of Gizmo Lovers and the chief contributor. He's been online since 1989 and active in several generations of 'social media' - mailing lists, USENet groups, web forums, and since 2003, blogging.    MegaZone has a presence on several social platforms: Google+ / Facebook / Twitter / LinkedIn / LiveJournal / Web.    You can also follow Gizmo Lovers on other sites: Blog / Google+ / Facebook / Twitter.
View all posts by MegaZone →
This entry was posted in Amazon, Broadband, General Tech and tagged Amazon, Gifts, NETGEAR, sale. Bookmark the permalink.
Performance Optimization WordPress Plugins by W3 EDGE