No, I don’t mean the old HME SDK. Or the network remote control protocol. Part of the new TiVo Premiere software platform is support for apps written in Adobe Air as well as additional hooks for 3rd party apps for mobile devices and web apps that hook into the TiVo. To date the API for these new interfaces have only been used internally and shared with limited partners, but it looks like TiVo is preparing to make them more widely available. 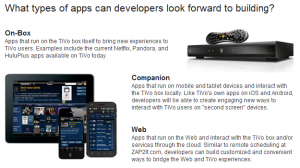 I’ve signed up for more information. We’ll have to see if they give me a peek since I’m a blogger and not really a developer (I’ve done software development professionally, but not for several years). But I presume that at some point they’ll want to get the word out if they’re serious about attracting 3rd party developers to the TiVo platform. I’ve been saying for years now that TiVo really needs to create an ecosystem around TiVo to make it ‘stickier’ for existing users and to give prospective customers more reasons to make the jump. I had high hopes for HME (Home Media Engine) back in the day, and it got off to a good start. But then TiVo pulled back from supporting the public API for HME and the updates stopped. HME became an internal-only development tool for TiVo and their partners. A lot has changed in the intervening years, within and without TiVo, so I’m hopeful this time things will be different.

MegaZone is the Editor of Gizmo Lovers and the chief contributor. He's been online since 1989 and active in several generations of 'social media' - mailing lists, USENet groups, web forums, and since 2003, blogging.    MegaZone has a presence on several social platforms: Google+ / Facebook / Twitter / LinkedIn / LiveJournal / Web.    You can also follow Gizmo Lovers on other sites: Blog / Google+ / Facebook / Twitter.
View all posts by MegaZone →
This entry was posted in DVR, Software, TiVo and tagged SDK, software, TiVo. Bookmark the permalink.
Performance Optimization WordPress Plugins by W3 EDGE