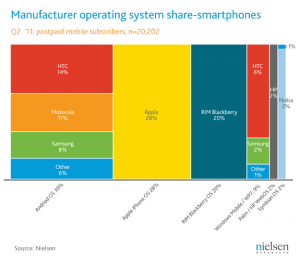 According to Nielsen’s June data, Android now controls 39% of the US smartphone market. Apple’s iOS comes in second at 28%, and RIM’s Blackberry OS has fallen to 20%. Windows Mobile & Windows Phone 7 together give Microsoft 9% of the market, while HP’s WebOS and Nokia’s Symbian OS each claim a measly 2%.

Apple is the HW vendor with the largest single share, as they’re the sole maker of iPhones an thus claim 28% of the market in HW. HTC and RIM are tied for the second spot with 20% apiece. HTC’s 20% is split – 14% from Android and 6% from Windows phones. If the trends continue HTC will probably push RIM into the 3rd slot in HW very soon, if they haven’t already. Motorola claimed 11% of the HW market, and Samsung 10% – split 8% Android, 2% Windows.

As RIM continues to decline this is really turning into a two horse race between Android and iOS, with Android continuing to grow at a faster pace. It may be a while before any single Android HW maker overtakes Apple though, if it happens.