Save $100 on Tablets in-store at Staples 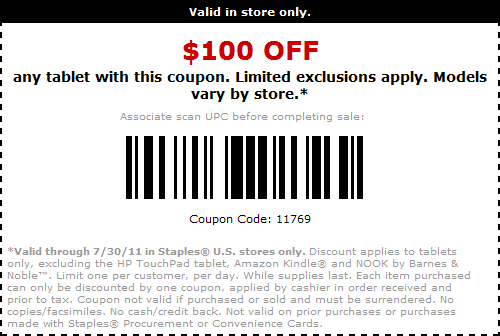 Staples is currently running this coupon good for $100 off the purchase of a tablet in-store (sorry, not via their website). It isn’t good on the HP TouchPad, Amazon Kindle, or Barnes & Noble Nook, but is good on other tablets.

But call your local store before heading over to make sure they have the tablet(s) you want. I called the three stores closest to me, and none of them stock the Asus Eee Pad Transformer. One store said they thought their shipment of Toshiba Thrive tablets was on the truck that came in today, but they hadn’t been unpacked yet. They have other tablets – the Samsung Galaxy Tab, one by Acer, the excluded HP TouchPad, etc. So check before you waste gas.

Tip of the hat to Liliputing.

MegaZone is the Editor of Gizmo Lovers and the chief contributor. He's been online since 1989 and active in several generations of 'social media' - mailing lists, USENet groups, web forums, and since 2003, blogging.    MegaZone has a presence on several social platforms: Google+ / Facebook / Twitter / LinkedIn / LiveJournal / Web.    You can also follow Gizmo Lovers on other sites: Blog / Google+ / Facebook / Twitter.
View all posts by MegaZone →
This entry was posted in Android, Blogs and tagged android, Blogs, coupon, Liliputing, Staples, tablet. Bookmark the permalink.
Performance Optimization WordPress Plugins by W3 EDGE