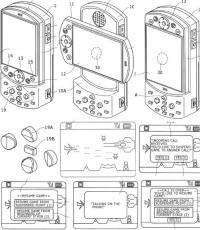 This is interesting, it seems Sony Ericsson has patented the ‘PSP Phone’. The name pretty much says it all – a combination cell phone and PlayStation Portable.

As the image shows, the screen rotates through 180-degrees for a more gaming-friendly orientation, putting the controls into a PSP-like configuration. Sony Ericsson has already drawn on Sony brands in the past, producing Walkman-branded music-phones and Cybershot-branded camera-phones. It looks like an interesting concept to me.

Oh, speaking of the iPhone – Apple has announced June 29th as the release date. Frankly, I couldn’t care less. I’m not impressed by the iPhone. Some of the technology, like the multi-touch screen, is nice. But overall, from what I’ve seen it wouldn’t replace my Treo very well. Once they’re in stores I’ll try to play with one to see if it makes a better hands-on impression.

MegaZone is the Editor of Gizmo Lovers and the chief contributor. He's been online since 1989 and active in several generations of 'social media' - mailing lists, USENet groups, web forums, and since 2003, blogging.    MegaZone has a presence on several social platforms: Google+ / Facebook / Twitter / LinkedIn / LiveJournal / Web.    You can also follow Gizmo Lovers on other sites: Blog / Google+ / Facebook / Twitter.
View all posts by MegaZone →
This entry was posted in General Tech. Bookmark the permalink.
Performance Optimization WordPress Plugins by W3 EDGE