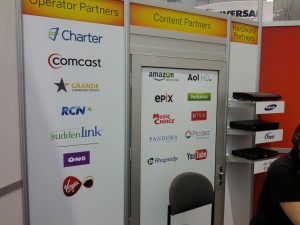 It pays to observe carefully, you never know what you might spot. Like this photo that I snapped of something I noticed in TiVo’s booth at The Cable Show 2012 today. It is the kind of thing your eyes might just skim over, just typical booth decoration. But look closely – did you catch it? Well, more specifically, did you notice the two new content partners?

If you spotted EPIX and Aol HD, congratulations. Neither of those have been previously announced – even at this show. After I spotted those I asked Jim Denney about them and he seemed a little surprised that they were on the wall too, but said that since they’re clearly visible they were fair game. He couldn’t tell me much, but did say that the EPIX deal would probably be tied to MSO-provided units as EPIX is similar to HBO Go in that your cable provider has to have a deal with EPIX to enable access. You can see the currently supported providers & devices on their site. I’ll note that Charter & Suddenlink, two MSOs distributing TiVo HW, are on the list. So I think we can guess those are the likely MSOs to receive EPIX on TiVo.

Aol HD on the other hand will be a retail play, joining Netflix, Hulu Plus, Amazon Instant Video, YouTube, et al. Aol HD is currently available on select Sony and Samsung devices, Roku, Google TV, Boxee, DivX TV, and Yahoo! Connected TV devices – and apparently coming soon to TiVo. As one of their recent press releases put it:

Expect both of these to be on the TiVo Premiere family, and likely not on earlier models.

I also noticed that Cox is missing from the Operator Partners list, but I don’t read too much into that. TiVo said they’re still working on their VOD support, but since they haven’t launched anything yet I can understand why TiVo wouldn’t be touting them on their booth.

Though I did confirm with TiVo that the deal with Canal Digital in Europe has basically fizzled out, as I previously covered. Nothing official has been announced, and I don’t expect anything to be said – companies generally don’t announce when deals wither on the vine. Like I said before, it is a setback, but nothing earth shaking.

Here’s a gallery of a few photos I shot in and around TiVo’s booth today:

Again, if you have questions you want me to ask TiVo, or any other exhibitor at the show, let me know and I’ll see what I can do.