Back in February I posted about TiVo’s planned transcoding box and IP STB thin-client, without too many details. Well, The Cable Show is in Boston this week and I’m attending, and today I met with TiVo. I talked mostly with TiVo’s Public Relations Manager, Jessica Loebig, and VP & GM of Product Marketing, Jim Denney, and, along with the official announcements, I have some more info.

The ‘transcoding box’ is now officially the TiVo Stream, and it will be available to both retail customers and TiVo’s cable MSO partners later this year. The render to the left is the retail version of the box, while the one to the right is the MSO version. They’re pretty much the same except for coloring, and obviously the final labeling will change. 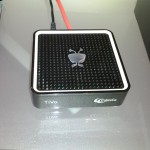 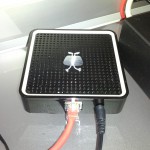 The TiVo Stream acts like a Multi-Room Streaming (MRS) client on the network, just like another Premiere would. While the hardware is cable of transcoding four streams, it is limited to two per Premiere due to transport throughput limits on the Premiere end. So to use all four transcoding stream simultaneously you would need at least two Premieres on the network. As previously reported, the MPEG-2 streams are transcoded to H.264 for delivery to ‘second screen’ devices within the home.

The Stream supports real-time streaming as well as side-loading of content onto a mobile device for later viewing away from the network. However, copy protection does apply. It is basically Multi-Room Streaming (MRS) vs. Multi-Room Viewing (MRV). If you can stream a problem between Premieres, you’ll be able to streaming it to a second screen. And if you can copy programs between TiVos, or to a PC via TiVoToGo, you’ll be able to side-load it. But if a program is blocked from TiVoToGo it will also be blocked from side-loading. TiVo doesn’t make the rules, they just follow them. So it really depends on how draconian your MSO is.

The Stream can access ‘Live TV’ – kind of. Since it acts just like any other MRS client, and MRS only streams recordings, what happens is it triggers the Premiere to start recording the content. The Stream then accesses that recording in progress and streams it. So in the end there is a recording on the Premiere of the show you streamed ‘live’.

And, as I’ve said previously, right now the intention is to support clients within the home. So place shifting content onto your phone or tablet in another room, but not across the Internet to another location. So this will not be a Slingbox replacement, at least to start. TiVo acknowledges the interest and it is something that might come via a software update. They have looked into it, and interestingly they’ve even talked to Sling Media about remote streaming (possible now that TiVo and EchoStar have kissed and made up), but there is nothing firm at this time.

Jim Denney and I talked a bit about future plans and the transcoding eventually being ‘baked in’, and it is all but certain to happen. It is all a trade off, and right now we’re not quite at the tipping point. SoCs with transcoding baked-in are appearing but are still higher costs parts and there have been performance tradeoffs. We talked about the Broadcom BCM7425, which has dual transcode support, and TiVo has looked at the chip. And there is a newer BCM7435, which just started sampling, which has quad transcode support and a general bump in capabilities, including 8 QAM tuners. (Humax has a demo box at the show using this chip, but they don’t expect it to be available to MSOs until 1Q13.) So TiVo is looking ahead and it is all but a given that this will be baked into a future product, but I wouldn’t expect that until 2013 at the earliest.

The other new set top box is the IP STB – which doesn’t have a snappy name yet, sorry. This is the baby brother to the TiVo Preview and at launch it will only work with the TiVo Premiere XL4/Q – not the TiVo Premiere or Premiere XL. STOP! Before you freak out, there is a reason, and this should change with a future update. Calm? OK. The IP STB does not have a tuner of its own, it uses a tuner from the XL4 for Live TV. In the initial release this requires dedicating a tuner in the XL4 to the IP STB. Yes, that means the tuner is not available for recordings, etc. This is done during setup, you pair the IP STB with a single Premiere XL4 and select one tuner to dedicate.

TiVo knows this is not optimal, but it is a matter of releasing something that is ‘good enough’ for market and then improving it. The plan is to have dynamic tuner allocation in a future release, whereby the IP STB would grab a free tuner for Live TV. But it is a sticky development problem to solve, so for the first release they basically avoided it by going with the dedicated tuner. It is sticky because there are a number of use cases. How can the unit reliably schedule recordings when one (or more if you have multiple IP STBs) can grab a tuner? How do you handle it if all four tuners are in use and someone wants to access Live TV on an IP STB? Etc. I’m sure lots of people have answers, but I’m also sure a lot of those answers will conflict. So TiVo needs time to work on the issue, do their usability testing, and create a good solution.

This need to dedicate a tuner is also why the Premiere and Premiere XL are not supported in the first release. They’d be reduced to single-tuner units. With the XL4 sacrificing a tuner, or even two, isn’t as big a deal. Again, this is temporary and TiVo plans to resolve this in a future update. (And just don’t even start with the “Oh, so when will that be?”, OK?)

I did ask Jim if it might be possible to pair it with an XL4 and *not* assign a tuner at all, which would mean no Live TV on the IP STB. Some users, like myself, never watch Live TV and wouldn’t miss it. I’d rather leave all four tuners free to record and use the IP STB only for watching recordings and accessing OTT content. He didn’t know if that was possible, and he’ll look into it. I think that’d be a nice setup option. 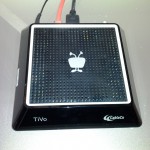 As for the hardware itself, it is a small, square, trapezoidal unit in the same league as the Apple TV or a Roku box. It supports all of the standard TiVo Peanut remotes, including the TiVo Slide remote. I didn’t get the specific model number of the chip inside, but Jim said it is roughly equal in performance to the SoC in the Premiere XL4, and that performance on the IP STB can be even higher because it doesn’t have all of the other work to do with recording, etc.

The back of the box is where you’ll find all of the connectors – coax, a component break-out port, a composite A/V break-out port, HDMI, Ethernet, USB, and power. Component and composite A/V connections are accomplished via break-out cables, similar to some of the Roku models. The coax connection is not for a tuner, it is for MoCA and only MoCA. At this time the USB port is only for the Bluetooth dongle used by the TiVo Slide remote. It will not support the old TiVo 802.11g WiFi adapter as TiVo is actively discouraging the use of WiFi due to the high bandwidth demands of the box. Though there is nothing stopping you from using an external 802.11n, or even a new 802.11ac, bridge.

I did ask if the box could be used as a MoCA bridge, like the XL4, and it cannot. So you can’t use an XL4 and an IP STB to bridge Ethernet over MoCA for another room. I was thinking that if it could act as a bridge you could connect Ethernet to the XL4, use MoCA to feed an IP STB in the bedroom, and then connect other devices, like a Blu-ray player, to the Ethernet on the IP STB. But no such luck, sorry. You’d need another ECB (Ethernet to Coax Bridge).

It is the same UI you know and (probably) love from the TiVo DVR. When you access Live TV it uses the dedicated tuner on the XL4. Recordings are streamed as-is from the XL4 to the box, so they’ll be the same MPEG-2 content. Full quality, there is no transcoding. All OTT IP content, such as Netflix, Hulu Plus, and YouTube, stream directly to the box over the network without touching the XL4. Cable MSO VOD, where supported, would require a tuner on the XL4, as it is delivered today via QAM and not IP.

Now, you probably want to know pricing and availability, right? Yeah, sorry. No pricing details as of yet. And the timeline is ‘in the coming months’. It looks like fall, maybe late summer if we’re lucky.

I think that’s it on these two boxes. I have more photos, if you want to see them check out my Picasa gallery from the show. I’ll be adding more photos as I take them the next couple of days as well.

If there is anything else you want to know, just ask. I may have forgotten to share something, and the show has two more days so I can go back to ask more questions.

EDIT: I did go back, and I did ask more questions, and I’ve posted the new info.

Through these new products, operators working with TiVo can give their subscribers the content they want on any screen within the home, including secondary televisions, tablets and smart phones and all through the same easy-to-use TiVo interface. For example, the IP set-top box compliments the home’s primary TiVo DVR by extending the TiVo experience onto secondary TVs including live and recorded television viewing. TiVo Stream delivers content to a customer’s tablet or mobile device, creating a cohesive viewing experience no matter how they choose to watch their programs. Both products are optimized for operator distribution, including automated provisioning and activation, and the low-capital costs that operators demand.

Tom Rogers, President and CEO, TiVo Inc. said, “Consumers not only want an enjoyable TV experience, but now demand choice and the flexibility to watch content on multiple devices and screens within the home. TiVo has worked with our operator customers to create a suite of affordable companion devices that deliver a cohesive experience regardless of the screen the customer wants to use.”

The IP set-top box works with the TiVo Premiere Q, a home’s primary gateway device, to give consumers access to live and recorded TV, operator VOD, plus broadband-delivered content on every TV in the house. This is delivered through the innovative TiVo experience consumers have come to know and love. It includes integrated MoCA to simplify home networking and multi-room applications.

TiVo Stream seamlessly delivers the content available on a consumer’s TiVo Premiere or Premiere Q DVR to alternative screens such as iPads and iPhones. Unlike similar offerings in the market, this is the first product to enable streaming or download of shows simultaneously to multiple portable devices without interrupting what’s playing on the television. The power of TiVo Stream enables users to quickly transfer shows to their mobile device for viewing outside the home.

TiVo will release both products at retail and through select cable operators. Additional details on availability for both the IP set-top box and TiVo Stream will be announced in the coming months.

TiVo unveiled details about both products during the 2012 NCTA Cable Show in Boston. For more information visit the TiVo booth #1859 located in the main exhibit hall.