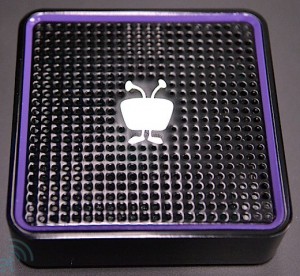 I’ve actually been working on a post about this for a little while, and on today’s financial conference call President and CEO Tom Rogers provided the final piece. Last month at CES 2012 TiVo was showing off a transcoding box and EngadgetHD has a very nice photo gallery of the unit (which is where I ganked the photo from). I didn’t report on it at the time since I wanted to gather some more info. Just before I left for my wedding & honeymoon I had a conversation with TiVo’s Public Relations Manager, Jessica Loebig, which filled in more info but left a few questions. She arranged for another conversation, with TiVo’s VP and GM of Product Marketing, Jim Denney, last Friday, just after my return. I’ve been a bit swamped catching up on life, and my day job, so more posts based on that conversation are forthcoming.

On today’s call Tom Rogers stated that the transcoding box would ship “later this year”, which I believe is the first firm public statement.

From a technical perspective, based on my conversations with TiVo, the unit that comes to market will probably resemble the unit previewed at CES, but it may not be exactly the same. It is planned to be an Ethernet only device, most likely installed near the router in the home. It will stream content from TiVo Premiere units using the same system as the Premiere-to-Premiere Multi-Room Streaming (MRS) available today. The content will then be transcoded to H.264 and forwarded to devices running TiVo’s client app – such as Android or iOS phones and tablets. Users will be able to view the streams in real time, or they can be saved on the device for later viewing – which is how side-loading is accomplished.

The hardware itself is powered by Zenverge, so it looks like my prior speculation was close to the mark. However, the unit is not planned to have MoCA. I asked Jim Denney about this and he said that MoCA was considered, but given the envisioned use case it was felt that the added cost wasn’t justified. And after discussing it with him, I see his point. Even if the TiVo units are on MoCA, that MoCA network will need to be connected to a non-MoCA network to reach the client devices. And that connection point is a logical place to connect the transcoding box. It doesn’t really make sense to connect it to the MoCA network when it’d have to send the transcoded signal back over the same network to eventually be bridged off to the client network. Keeping the unit dirt simple – just a power connection and Ethernet – keeps it small and keeps the component costs down.

From a capability standpoint, the unit can accept and transcode up to four streams simultaneously. And on today’s call Rogers made the interesting comment that it could be a recording, or LiveTV. I believe the latter is new. Today streaming is only between units that have their own tuners, either Premiere-to-Premiere or Premiere-to-Preview, so there isn’t a need to grab a tuner on the remote device for ‘live’ TV. But for those who want to watch live on a second screen device, it’d be a necessity. (As well as for another application that’s coming, but I’ll leave that for another post.

I asked about the streaming technology – is it based on Sling Media or Monsoon Multimedia, or anyone else? It is not. It is an in-house implementation using Zenverge’s silicon and developer tools. So it is unique, and the clients will come from TiVo. That gives me some hope. While Sling & Monsoon Multimedia treat their clients as a revenue stream, TiVo has been giving away their client software. And since you need a TiVo with an active subscription to use this transcoding box they have that revenue stream to draw upon. Rather than milking the customer for anther payment, I’m hopeful they will continue to provide the client software for free, relying on the sales of the hardware, and the TiVo subscription, for revenue.

If they do this it also makes me hopeful that they might publish the client APIs for 3rd parties to build support, as well as create clients for other platforms that aren’t Android or iOS. But that might be a bridge too far since I’m sure they’ll need to protect the content to keep the content owners happy, and that means they couldn’t tell others how to decrypt.

From my conversation with Jessica & Jim, the current plan is for streaming within the home, with side-loading for ‘on the go’ viewing. But not for place shifting streaming content outside of the home. Jim & I talked about this for a while, since I’m a long time Slingbox user and for me streaming beats side-loading hands down. He made the valid point that side-loading has some popular use cases – the most obvious is for when streaming isn’t an option, such as on an airplane. I know parents also use it to load up a bunch of their kids’ favorite shows to whip out on demand to pacify them, etc. So I’m not going to argue against side loading. It isn’t a use case that really interests me, but I acknowledge that it is valid.

As far as streaming outside of the home, Jim was sure to stress that it has not been “designed out” of the product. It isn’t currently planned, but it is something that could be added if there is demand. A lot of the concern is over quality of the experience, bandwidth requirements, etc. I made the point that I’ve been using a Slingbox since I had 768kbps upstream ADSL and only 2.5G EDGE data on my phone, giving me maybe 200kbps if I was lucky, and it was usable even with 320×240 resolution. And these days I have a 5Mbps uplink and 4G LTE on my phone, which has a 720p screen and HDMI output capabilities.

I’ve streamed HD video from my Slingbox PRO-HD from Worcester, MA to Seattle, WA and viewed it on my laptop while I’m out there for work. Being able to access my personal content at home, in real time, while I’m on the road just can’t be matched by side-loading. So I’m strongly in favor of TiVo enabling remote streaming as well. I argued that bandwidth costs continue to drop as speeds continue to increase, and device capabilities have never been greater. Now more than ever before streaming is viable.

I felt it was a good discussion and that TiVo is very much open to feedback on this issue. So it’d be good to hear from the user base. Do you want remote streaming? Or does local streaming and side-loading meet your needs?

No pricing or specific release dates are available at this time, so I can’t comment on that. But if they can bring this to market at a decent price point I think this would be very attractive, especially if they add remote streaming. By way of comparison, the DirecTV Nomad is $149, but you also need to subscribe to the Nomad Mobile DVR Service. My impression of this TiVo unit is that it is a one-time purchase, so it may retail for more than the Nomad. By while the Nomad is strictly store-and-forward side-loading, with real-time transcoding, the TiVo unit does streaming and side-loading, and it sounds like it will transcode for side-loading in better than real time.

I, for one, would be very interested in getting my hands on one of these units.