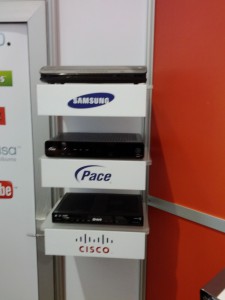 Well, that was fast. It was only February when TiVo announced a partnership with Pace to bring TiVo’s software to Pace’s hardware, and today they unveiled the first fruit of that partnership, the Pace XG1 Multi-Tuner Video Gateway. They even have a box on display in their booth, as you can see in the photo I took today.

The Pace XG1 isn’t considered a DVR, but a “Multi-Tuner Video Gateway”. It is really part of a new type of solution, in the same category as Arris’s Moxi Gateway. It is meant as a content ‘gateway’ into the home, feeding client boxes which actually handle the content display. The XG1 has six digital cable tuners as well as a built-in DOCSIS 3.0 modem for data connectivity and IP content delivery, and MoCA for home networking.

Running TiVo’s software it will support TiVo’s whole-home solution, streaming content to traditional STBs as well as IP clients. It is also compatible with TiVo’s phone & tablet apps. It will be available to US operators later this year.

I didn’t make it to Pace’s booth Monday. I’ll try to get there on Tuesday to see what additional info is available.

BOSTON, MA – May 21, 2012 – TiVo Inc. (NASDAQ: TIVO), the creator of and a leader in advanced television services, including digital video recorders (DVRs), for consumers, content distributors and consumer electronics manufacturers, and Pace (LSE: PIC), a leading developer of technologies, products and services for global broadband and broadcast markets , today announced details of the first product, the Pace XG1, resulting from a global partnership TiVo and Pace announced in February 2012 to develop flexible, advanced television solutions for operators. This new Multi-tuner Video Gateway from Pace will provide cable operators in the Americas an advanced television solution for their customers by bringing to market the full award-winning TiVo experience on powerful, new platforms designed to be easily integrated with today’s cable networks.

The Pace XG1 includes 6 video tuners, an integrated DOCSIS 3.0 modem, and at least 500GB of on board hard drive storage. It will utilize TiVo’s whole-home capabilities, such as multi-room streaming and support for both traditional set-top boxes and IP devices as clients over MoCA, and support for TiVo’s mobile and tablet applications.

David Sandford, Vice President and General Manager of TiVo’s Service Provider Business said, “This partnership will make the TiVo experience easily accessible to more cable operators than ever before. It will provide operators a best-in-class advanced television solution that they can quickly and cost-effectively deploy and will serve as the gateway to a rapidly expanding choice of content across multiple screens through TiVo’s whole-home solutions.”

Tim O’Loughlin, President of Pace Americas, stated, “There is no denying that the current climate for operators is immensely competitive, and we have been hearing more and more frequently from this community that TiVo is a user experience that they want to offer. We are excited this partnership has yielded a product that will harness the very best of traditional television and broadband delivered content into a seamless, enjoyable package across multiple Pace platforms and customer owned devices.”

As previously announced, this initial offering will first be made available by Pace to cable operators in the Americas later this year. TiVo and Pace also expect to follow the XG1 with additional solutions for domestic and international operators soon after.

TiVo and Pace unveiled details about the Pace XG1 at the 2012 NCTA Cable Show in Boston. For more information visit the TiVo booth #1859 and Pace booth #1653 located in the main exhibit hall.

MegaZone is the Editor of Gizmo Lovers and the chief contributor. He's been online since 1989 and active in several generations of 'social media' - mailing lists, USENet groups, web forums, and since 2003, blogging.    MegaZone has a presence on several social platforms: Google+ / Facebook / Twitter / LinkedIn / LiveJournal / Web.    You can also follow Gizmo Lovers on other sites: Blog / Google+ / Facebook / Twitter.
View all posts by MegaZone →
This entry was posted in DVR, Press Release, TiVo and tagged Pace, Press Release, The Cable Show, TiVo, XG1. Bookmark the permalink.
Performance Optimization WordPress Plugins by W3 EDGE