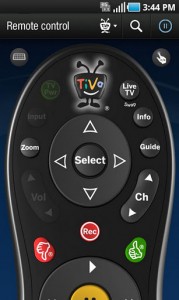 After posting Wednesday about TiVo’s update to their iOS Apps and how they expected to release the Android tablet app in ‘spring’ and bring the new features to all Android apps in ‘summer’, I was a bit surprised to find my Galaxy Nexus prompting me to update the TiVo app on Thursday. But the 1.5.1.35(8) update doesn’t bring any major new functionality, just minor incremental updates. And how about that convoluted version number? TiVo must have some ex-Cisco IOS developers handling their numbering scheme. (If you don’t get the reference, don’t worry. If you did – greetings my fellow networking geek!)

The Exit Button, or lack thereof, is something a number of people had complained about so that should make some of you happy. And if you had issues with the app before, it might be worth trying again to see if the fixes resolved your issue.

Now, TiVo, while we’re waiting for the official tablet version of the app, why don’t you let us use this on our tablets? You have WXGA support now! 1280×800 is the resolution of nearly all Android tablets. And we know it runs on Android 4.0 Ice Cream Sandwich already, as it works on ICS phones. It would be better than nothing. Then later you can release one Android app that works on both tablets and phones, as developers should. (I’m looking at you Sling. You and your separate $30 apps for tablets and phones.)

MegaZone is the Editor of Gizmo Lovers and the chief contributor. He's been online since 1989 and active in several generations of 'social media' - mailing lists, USENet groups, web forums, and since 2003, blogging.    MegaZone has a presence on several social platforms: Google+ / Facebook / Twitter / LinkedIn / LiveJournal / Web.    You can also follow Gizmo Lovers on other sites: Blog / Google+ / Facebook / Twitter.
View all posts by MegaZone →
This entry was posted in Android, DVR, Software, TiVo and tagged android, TiVo. Bookmark the permalink.
Performance Optimization WordPress Plugins by W3 EDGE