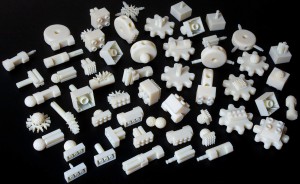 Do you ever play with construction toys as a kid, or have kids yourself who do? Tinkertoy, Lego, Duplo, Lincoln Logs, K’nex, etc. They’re great, I know I spent hours and hours as a kid, and, admittedly, a few as an adult, playing with them. I also used to ‘kit bash’ by combining different brands of building toys to make something new. Maybe a Tinkertoy tower with a Lincoln Log cabin on top. Or a buildings made of Bristle Blocks and Lego. If you’re reading this you probably did too, and had the same issue I, and the children in this video, did:

The different brands of toys just don’t go together. Unless you can just stack them and let gravity hold things together there really isn’t a good way to combine different sets. Sure, there are some building block brands that are ‘compatible’ with Lego, but really, that’s just more Lego. It isn’t the same. What if you could really connect Lego to K’Nex, or K’Nex to Tinkertoy, and make functioning structures. That could really open up possibilities.

And that’s where 3D Printing comes in. F.A.T. Lab and Sy-Lab have created the The Free Universal Construction Kit, which provides connector pieces to bridge ten popular construction toys with each other. The toys covered are Duplo, Fischertechnik, Gears!Gears!Gears!, K’nex, Krinkles (aka Bristle Blocks), Lego, Lincoln Logs, Tinkertoy, ZomeTool, and Zoob. Well, technically it is currently eight. Zoob and ZomeTool are still covered under patents and the adapters for those won’t actually be released until December 2016 and November 2022, respectively.

So you can go out and buy these now, right? Well, no – for two reasons. First, you can’t buy them because they are free. Second, you can’t buy them because they aren’t physical objects – until you make them so. They’ve been released as STL files through Thingiverse.com. You provide the 3D printer, like a Makerbot, download the files and print the part(s) you need. Check out the parts in action in this video:

I think this is exciting because it shows the potential for 3D printing. Today 3D printing is still a fringe thing, far from the mainstream, but at one time so were printers in general. Printing has evolved from fuzzy dot matrix printers to photo quality ink jets that are so cheap they’re basically disposable. The next jump is 3D printing. There are already a couple of commercial 3D printers on the market and they’ll only continue to improve. Just as we can download books, music, movies, and games today, in the near future we’ll be downloading ‘things’ the same way.

Small items to start, certainly, but we’ll have larger printers before too long. Need some extra chairs for the cook out? Print them. Plates & cups too. Then when it is done toss them into the chipper to be converted back into feedstock. Now that’s recycling. Want a truly custom case for your phone? Modify a design and print one. 3D printers continue to evolve and we’ll have multiple materials, colors, etc., to choose from.

You can even ‘print’ metal using powered metals and a temporary binder, then fusing the part in a sintering oven. Or directly building up a part in powdered metal by using a laser to solidify it layer my layer. A lot of complex metal parts are made this way today using presses and dies to shape the part then sintering to make it solid. (I had a factory temp job in college working in such a place. One of the dirtiest jobs I’ve had, but really interesting seeing how it was done.)

Maybe it seems far out, but much of what we have today seemed pretty far out just a decade or two ago. And maybe thinking about the toys has my imagination going. For now – go print out some toys and have fun.