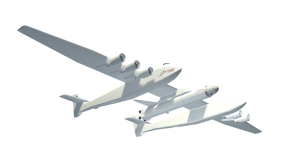 What do you get when ex-Microsoft tycoon Paul Allen pulls together Burt Rutan’s Scaled Composites, home of SpaceShipOne, and Elon Musk’s SpaceX, home of the Falcon series of launchers? A new company, Stratolaunch Systems, with a truly audacious plan for airborne orbital launches! A third partner, Dynetics, will handle the mating systems that bring the two together.

The concept combines a massively scaled up version of the White Knight Two carrier aircraft for SpaceShipTwo with a rocket that looks like the love child of SpaceX’s Falcon 9 and Orbital Sciences’ Pegasus XL. This isn’t just a pie-in-the-sky idea, they have some serious leadership on board. And Scaled Composites and SpaceX both have proven track records of success, and of pulling of audacious plans that many expected to fail, so I wouldn’t bet against them. And I wouldn’t expect them to be involved if they weren’t serious.

The design of the system is no coincidence, Paul Allen worked with Burt Rutan and Scaled Composites to build the original White Knight One and SpaceShipOne, so they’re adapting a design they have experience with. The rocket actually is a variant of the Falcon 9, known as the Falcon 9 Air. Based on the renderings it looks a bit more like the stillborn Falcon 5 with a wing – given it is shown with five motors and not nine. But if you’re going to launch from altitude you don’t need as much initial thrust as you’re already part of the way ‘up hill’ and have less atmosphere to push through as well.

They haven’t released many specifics, but they did release some general information. The carrier aircraft is to weigh 1.2 million pounds – one has to expect that’s the loaded weight – with a 385 foot wingspan. It will use six “747 engines”, which is quite vague as the B747 has used a variety of engines over its life. It could be the B747-8′s new GEnx-2B engines, which have 66,500 pounds of thrust, or the next most logical would seem to be the B747-400′s GE CF6-80 or P&W 4062 with 62-63k. It strikes me as oddly specific and yet vague at the same time really. I’m sure there is some design consideration driving it and not, say, four GE90s of the B777. The carrier will be able to carry the rocket up to 1,300 miles from the departure point which allows for optimal positioning for the launch. Though the selection of departure points will be limited, as it requires a runway 12,000 feet long – minimum.

The rocket, as I said, is a derivative of the Falcon 9. It will way approximately 500,000 pounds at launch and will be approximately 120 feet long. Launch will happen at around 30,000 feet. Lots of approximates.

Flight testing is expected to begin in 2016, so we have a few years before we’ll see this beast flying. Initial launches will be for cargo, but they plan to use the system for manned orbital launches eventually. I really hope they pull it off because, well, damn.

Now let’s scale this up to air launch a Falcon Heavy.