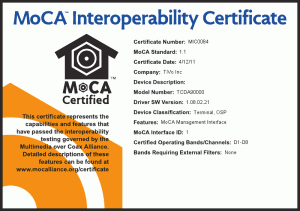 The Multimedia over Coax Alliance, MoCA, has now certified over 100 devices produced by over 60 members, and one of those members is TiVo. The list of certified products includes the TiVo TCDA90000. The image on this post is the certificate for the TCDA9000. My best guess is that that is the TiVo Premiere Q/Elite, the forthcoming four-tuner box. We know it has MoCA.

The other TiVo unit we know will contain MoCA is the non-DVR TiVo Preview. However, as there is only one TiVo unit on the list, and all of the firm launch announcements are around the Q/Elite, I’d expect that to be certified first. Though the public list of products isn’t necessarily comprehensive. Vendors may have a unit certified and kept off the list until they’re ready to go public.

MoCA 1.1, the spec in wide use today, supports speeds up to 175Mbps. The latest spec, MoCA 2.0, just being incorporated into new designs, goes up to 400Mbps. That may not sound fast compared to Gigabit Ethernet or 802.11n with dual-band routers up to 750Mbps, but the fact is most MoCA applications are running as a separate network just to connect a handful of devices for streaming video, whole-home DVR applications and the like. And MoCA’s speeds are more than enough for several simultaneous full HD streams.

MegaZone is the Editor of Gizmo Lovers and the chief contributor. He's been online since 1989 and active in several generations of 'social media' - mailing lists, USENet groups, web forums, and since 2003, blogging.    MegaZone has a presence on several social platforms: Google+ / Facebook / Twitter / LinkedIn / LiveJournal / Web.    You can also follow Gizmo Lovers on other sites: Blog / Google+ / Facebook / Twitter.
View all posts by MegaZone →
This entry was posted in Broadband, DVR, TiVo and tagged MoCA, Multichannel News, TiVo. Bookmark the permalink.
Performance Optimization WordPress Plugins by W3 EDGE