Posted on Thursday, September 27, 2007 by MegaZone 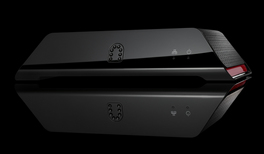 It turns out the FCC leak of the Slingbox SOLO information three weeks ago wasn’t too far in advance, as today Sling Media officially announced the new box. What I couldn’t say at the time was that I had, and still have, a pre-production unit at home that I’ve been trying out. Now Sling told me I can talk about it. I’ve been told the official press release will hit Thursday morning, so I’ll post that when I get it.

The new SOLO slots into the product line between the AV and the PRO. Updating Sling’s own product feature comparison table:

The SOLO is also Sling’s first simultaneous international launch – it will be available in the US for USD$179.99, Canada for CAD$199.99, and the UK for Â£129.99. The UK model is slightly different from the US/Canadian model, having a different IR chipset and the inputs are set for the UK’s 50Hz video frequency instead of the North American 60Hz refresh. The SOLO’s $179.99 price falls right between the AV & Tuner’s $129.99 and the PRO’s $229.99

The Slingbox SOLO is basically a Slingbox AV with the addition of component input, pass-through connections and a USB port. The rear of the unit has an IR blaster port, component video (Y, Pb, Pr) in & out, S-Video in & out, composite (RCA) video in & out, audio L/R (stereo) in & out, USB, Ethernet, and power connections, as well as a reset button. The unit ships with a Quick Start Guide, power adapter (which is not compatible with older Slingboxes – do not plug an old SB power brick into the SOLO, or vice-versa), Ethernet cable, remote control IR cable, and a composite A/V cable (composite video & stereo audio). The UK model will reportedly also come with a SCART to RCA adapter. You’ll have to supply your own S-Video or component cables.

The USB port is currently ‘For Future Use’ and Sling isn’t saying what that will be. When I first saw the unit, and in my earlier post, I speculated that it might mean SlingCatcher functionality was incorporated into the unit. However, having had more time to think about it, I doubt that is the case. The SlingCatcher will ship with a remote – the SOLO does not. Also, the SlingCatcher has HDMI and digital audio output, and the SOLO does not – which would make it a lower quality Catcher. I now believe the USB port is most likely meant to support a USB WiFi adapter in a future update, in the same way TiVo does. Only time will tell, of course.

As you can see from the photos, the SOLO is almost entirely glossy black, with red highlights. It is a very nice looking unit. Click on the images for a larger version:

Note that while the SOLO has multiple video inputs it, like the AV, is meant to control just one input device. There is only one audio input. However, as with the AV, you could connect devices to the other video inputs. Devices that don’t need audio, like a security camera, are simple. But you could also connect other devices if you share the audio input with Y-cables. You just need to make sure only one device is active at a time so that you don’t have multiple devices feeding audio to the Slingbox at the same time. But note that this is not officially supported or endorsed, and the IR blasters that come with the unit only have two emitters. If you need to support multiple devices, the Slingbox PRO is a better option. (Right now you can get a special Slingbox PRO and Sling HD Connect Cable Bundle for only $189.99 from Buy.com.

Speaking of the PRO, Sling is finally launching a version for the UK. It will be Â£199.99 and it includes the HD Connect cable. The built-in tuner in the UK model will support DVB-T.

My personal impressions of the SOLO are all positive. It is a nice looking, solidly built little box, and it performs as advertised. I’ve been using it with my TiVo Series3, mainly the component input, and it works just as I’d expect. I’d say it is just as good as my Slingbox PRO in encoding and streaming video. It has all of the functionality of the other Slingboxes, as far as the software goes. If you already have a Slingbox, there is nothing in the SOLO that would indicate a need to upgrade – unless you could use the component input. But if you’re looking to get your first Slingbox, the SOLO is definitely worth a look. If you only have one device to connect and you can take advantage of the component input, or having the pass-through ports would make your wiring job easier, then the SOLO is the right box for you. If you don’t need the component or pass-though, the AV is probably the best choice. And if you need to easily support multiple devices, check out the PRO.

The major online retailers don’t have the SOLO listed yet, and it isn’t even in Sling’s own store, so I’ll post links to purchase it once it goes up.

EDIT 2: BestBuy.com has it now.

MegaZone is the Editor of Gizmo Lovers and the chief contributor. He's been online since 1989 and active in several generations of 'social media' - mailing lists, USENet groups, web forums, and since 2003, blogging.    MegaZone has a presence on several social platforms: Google+ / Facebook / Twitter / LinkedIn / LiveJournal / Web.    You can also follow Gizmo Lovers on other sites: Blog / Google+ / Facebook / Twitter.
View all posts by MegaZone →
This entry was posted in Sling Media. Bookmark the permalink.
Performance Optimization WordPress Plugins by W3 EDGE