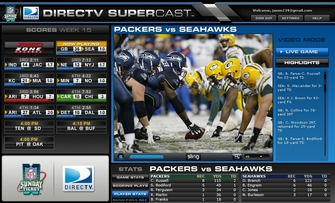 Check out the image, see the logo centered under the video image? No? Well, try the larger version of the image. See it now? Yeah, that’s the Sling Media logo. DirecTV is working with Sling Media in their NFL Supercast.

I’ve emailed some tech questions to Sling, but I’m going to presume SlingStream is being used for the streaming technology, and perhaps some of the SlingPlayer software is embedded in the Supercast client.

I heard back from Sling so I’ve updated this. Sling built the front end, the UI, and the entry way, and they’re continuing to work with DirecTV to enhance the Supercase experience.

Another update – Sling Media’s Dave Zatz posted some info over at SlingCommunity.com:

Supercast is an online destination provided to DirecTV’s SuperFan subscribers. Each Sunday, most NFL games will be streamed live. In addition to the live games, replaybale game highlights plus real-time scores and stats are also provided. We at Sling are responsible for hosting the service and for the user interface – which we intend to further enhance as the season progresses. Technologically speaking, Supercast is purely a web-based service, requiring Internet Explorer within Windows. (I can tell you from first-hand experience it works great in Parallels too.) Supercast does not require a Slingbox or utilize our SlingStream technology.

Personally I avoid Internet Explorer at all costs. And the only reason I don’t remove it from my Windows systems is that I do web development and need to test in IE for those people who still use it, and to check out things like this for the blog. I really hope that Sling does something to bring this to non-IE and non-Windows platforms. Be it Flash, Java, or even Silverlight – or some native viewer.

MegaZone is the Editor of Gizmo Lovers and the chief contributor. He's been online since 1989 and active in several generations of 'social media' - mailing lists, USENet groups, web forums, and since 2003, blogging.    MegaZone has a presence on several social platforms: Google+ / Facebook / Twitter / LinkedIn / LiveJournal / Web.    You can also follow Gizmo Lovers on other sites: Blog / Google+ / Facebook / Twitter.
View all posts by MegaZone →
This entry was posted in DirecTV, Sling Media. Bookmark the permalink.
Performance Optimization WordPress Plugins by W3 EDGE