Posted on Tuesday, September 4, 2007 by MegaZone 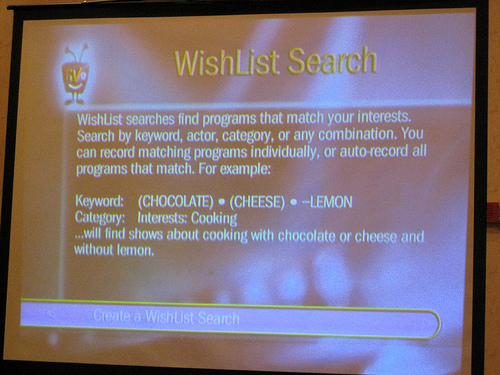 The annual TiVoCommunity Con (TCCon) gathering was held this weekend in Orlando, FL, and TiVo was there showing off some of their forthcoming updates. In a post at TiVoCommunity.com, user ‘stevel’ included the above photo, which shows what appears to be an explanation of advanced WishList Search capability – which includes boolean abilities. Note the two keywords ‘CHOCOLATE’ and ‘CHEESE’ and then ‘-LEMON’ with a category of Interests/Cooking – which will find cookings shows with chocolate OR cheese but NOT lemon as a keyword. Nice! I’m looking forward to this.

One of the years maybe I’ll make it to TCCon.