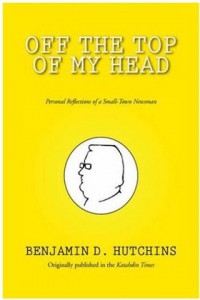 Long-time readers of this blog may remember Benjamin Hutchins, aka Gryphon, who, aside from being my best friend for over two decades, was a contributor to the blog for a while before the hiatus. He had his Technosophy column, Toy Reviews, and other assorted posts.

Those long-time readers might also recall that Ben had published a book back in 2005, titled Off the Top of My Head, which collected the columns he had written while working for the Katahdin Times in Maine. The book is still available in hardcover and paperback, starting at $20.99. But I recently commented to Ben that he should look into Amazon’s Kindle Direct Publishing program as a way to bring the book to the Kindle platform, and he took my suggestion. The book became available tonight to Kindle users for just $4.99. And it is in the Kindle Lending Library so Amazon Prime customers can borrow it for free – though Ben could use the five bucks, so I hope you buy it if you like it.

Sure, he’s been my best friend since we met back in 1991, so I’m admittedly biased, but he’s a clever & witty writer and the columns are full of humor. And I feature in a few of the columns, when he’s relating tales of our misadventures.