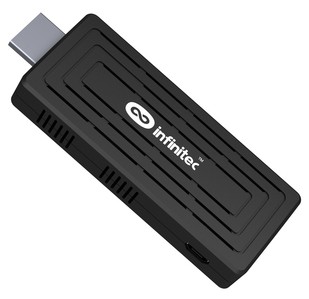 It might remind you of the Roku Streaming Stick, but the Infinitec Pocket TV is a different kind of beast. It is a full-featured Android 4.0 computing device in a stick form factor with an HDMI connector on one end. While the Roku Streaming Stick is an MHL device, drawing power from the MHL connection – and therefore working only with MHL devices, the Pocket TV works with any HDMI display and draws power via Mini USB which can be powered from any USB port or a dedicated power supply.

It is not a Google TV device, it runs the same Android 4.0 found on phones and tablets on a 1GHz Cortex A9 processor. The current design has 512MB RAM, but they’re investigating bumping that to 1GB before going into production. It has 4GB of on-board storage, but also includes a microSD slot for up to 32GB of additional storage. There’s also a full-size USB port for input devices and mass storage, or even a webcam for videoconferencing. Network connectivity is via 802.11b/g/n WiFi. There’s no Bluetooth currently, but they’re working on it. All of that in a package 86x31x14mm and weighing only 35 grams.

There are two remote controls available. The standard remote, included with the Pocket TV, is a traditional IR remote with 5-way navigation and several dedicated buttons for specific actions and Android navigation (such as Home, Back, and Search). The other remote is one I think most users will want, and that’s the Air Remote. The Air Remote connects to the Pocket TV via the network, so no line of sight is required. It includes a gyroscopic sensor so you can control the Pocket TV by simply moving the remote, and it has a full qwerty keyboard to make text entry a snap. You can also use the Google TV Remote app for Android and iOS to turn your smartphone into a remote control for the Pocket TV.

It sounds like a pretty interesting device, no? But this isn’t a product from a big company; Infinitec is a small, three year old start-up and this is a community funded development effort on Kickstarter. I first heard of it from PVRblog and I jumped right over to help fund the project. I’m in at the $135 level for a Pocket TV and Air Remote. I thought it was a great idea and I love to see small companies trying creative ideas, so I thought it was a project worth backing. And those who back the Kickstarter project also save money – the bundle I’m signed up for has an expected combined retail MSRP of $190. You can pledge as little as $110 for the standard Pocket TV with IR Remote. There are 26 days left to get in on the Kickstarter.

While you’re over at Kickstarter check out some of the other projects. I’ve backed several and I’m always looking for projects that pique my interest. Thanks to PVRblog for bringing this one to my attention.