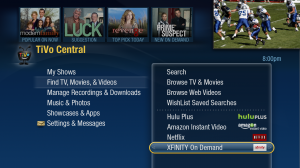 We were a little premature with the announcement of XFINITY On Demand support for Boston area TiVo users ‘next week’ two weeks ago. Last week came and went without a launch. But it is a week later and this time we have launch! It is official, TiVo Premiere users with Comcast in the Boston area should have access to XFINITY On Demand starting today.

“TiVo Premiere has always offered the best of XFINITY TV channels with the most popular web services, and we are excited to now integrate the XFINITY On Demand library for Boston subscribers, delivering a true one-stop shop for at-home entertainment,” said Doug Bieter, Vice President of Retail Sales for TiVo, Inc. “We are pleased that TiVo Premiere users in the Boston area will have an opportunity to experience this great XFINITY On Demand content and we look forward to additional markets in the near future.”

TiVo states it is available in the ‘greater Boston area’, so it should cover a fairly large geographic area. The TiVo website has a zip code look up to determine if your area has service. I just checked my old Waltham, MA zip code, 02453, and the site reports that service is available. (These days I’m in Worcester, MA, 01606, which is Charter territory. So no XFINITY On Demand for me.)

There is a little bit of bad news though. If you’re one of the few users still clinging to the old ‘soft-TiVo’ (Comcast DVR with TiVo) that Comcast offered way back in 2008 in the area, it is time to give it up and buy a real TiVo. For those who don’t remember, this was a special software image for Comcast’s standard Motorola DVR hardware that gave it the TiVo UI. But it never worked very well as the hardware is under powered and you had the HW running the base OS, with a Java interpreter on top of that, which then ran the TiVo software. It was a great idea in concept, but it never worked well in reality. So I don’t think this is a big loss, and the retail TiVo Premiere unit is far more powerful and feature-rich than those old units.

Now that they’re launching On Demand support for retail TiVo Premiere units, Comcast is discontinuing support for the soft-TiVo units on or around August 1, 2012. So you have until then to pick up a TiVo Premiere unit if you want to continue to have TiVo in your home. Before you run out and buy one at retail – TiVo is offering you one for free! See tivo.com/bostonoffer for details. They’re offering a 320GB TiVo Premiere for free with a monthly rate discounted to $12.95 from the usual $14.99, with a one year commitment. Or product lifetime service is $499.99. This offer is only for users who still have the Comcast DVR with TiVo.

If you’d rather have the 500GB TiVo Premiere, the 1TB TiVo Premiere XL, or the 2TB, four tuner TiVo Premiere XL4 they’re offering $100 off on those. And if you want multiple units they’re offering factory refurbished units for $49.99. (Personally I’d just get the XL4 and wait for the IP STB due later this year for multi-room functionality.) Again, these deals are only for customers who currently have the old Comcast DVR with TiVo and who are looking to switch before their service is turned off on or around August 1st.

Which area will be third? I think Chicago may have a shot. Why? Back in 2008 Chicago looked set to be the next market for the soft-TiVo, after Boston, but the roll out stopped before it launched there. And Chicago is one of two cities where Comcast launched tru2way support as a trial with TV manufacturers, before that effort fizzled as well. (The other city was Denver.) This means they’ve probably already done a lot of work upgrading their head ends there, and they are likely in a good position to take the upgrade for the new service. Plus Chicago is a large market, apparently 2.3 million cable households, so it would have a potential for a large return.

But that’s all speculation of course. Only Comcast knows where they’ll launch the service next.