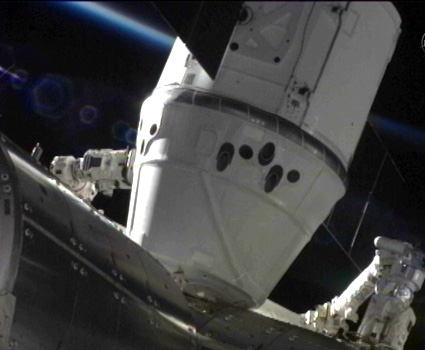 See that image? That’s a NASA TV image of the SpaceX Dragon capsule successfully berthed at the International Space Station (ISS), which occurred at 12:02 EDT today. The history books may well mark this as the moment the commercial space industry became ‘real’, as this is the first commercial vehicle to arrive at the ISS and it marks the start of commercial supply flights. This is truly a massive achievement by SpaceX, and they deserve all of the kudos they receive.

Note that I said berthing and not docking – they’re different. The Space Shuttle docked with the ISS. The Soyuz, Progress, and ATV (European Automated Transfer Vehicle) dock with the ISS. The HTV (Japanese H-II Transfer Vehicle) and Dragon berth. Docking is done under the craft’s own power and control. The craft flies toward a docking port on the ISS and moves into contact on its own. Berthing is handled by the station’s remote arm. The craft flies in toward the port, but stops about ten meters away and flies in formation with the ISS. The station’s arm reaches out and grapples the craft, and then draws it in to meet the docking, or berthing in this case, port.

Berthing is simpler than docking, but that’s all relative – neither is particularly simple. But berthing does require less from the approaching craft, and it is easier to get certified for berthing than for docking. The Dragon may dock on its own in the future, but it will evolve there. Certainly the plans to fly to Bigelow Aerospace’s planned private space station call for docking, as the station will not have an arm like the ISS. But docking is ‘good enough’ for the current mission, and autonomous docking is something that can be added to Dragon later.

NASA TV has a video of the approach, grapple, and berthing:

For some reason they slightly edited the version posted to YouTube and cut out the CapCom from the ISS including the “got a Dragon by the tail” like, which I thought was the best line in the video.


NASA Administrator Charles Bolden called the ISS to congratulate them on the successful berthing:


There was a post-berthing briefing as well, which covers a bit of what comes next:


Yesterday, as part of the tests to gain clearance for the berthing, Dragon flew below the ISS. This video shows the fly-under:


There was also a briefing last night for the truly interested:

MegaZone is the Editor of Gizmo Lovers and the chief contributor. He's been online since 1989 and active in several generations of 'social media' - mailing lists, USENet groups, web forums, and since 2003, blogging.    MegaZone has a presence on several social platforms: Google+ / Facebook / Twitter / LinkedIn / LiveJournal / Web.    You can also follow Gizmo Lovers on other sites: Blog / Google+ / Facebook / Twitter.
View all posts by MegaZone →
This entry was posted in Aerospace and tagged Aerospace, Dragon, ISS, NASA TV, SpaceX, Video, YouTube. Bookmark the permalink.
Performance Optimization WordPress Plugins by W3 EDGE