More Information On The TiVo Stream And IP STB 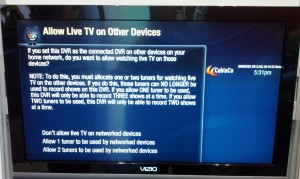 Since I made my post about the forthcoming TiVo Stream and IP STB last night I’ve been getting a lot of questions, and there were a few things I wondered about myself after I had some time to digest things. So I dropped by TiVo’s booth at The Cable Show again today and gathered some more information – including the photo you see here.

As they say, a picture is worth 1,000 words, and this one answers some of the questions I had, and that I heard from readers. Note that the photo is from a box running development software, so the screen and/or language therein may change before release, etc. But the underlying logic is what we should expect in the initial release. As you can see, you do not have to give up a tuner on your Premiere XL4 to use the IP STB – if you’re willing to forego Live TV, as I am. Basically you’re reserving one or two tuners in the XL4 for use by IP STB(s) elsewhere in the home. When a tuner is reserved it is not available for anything else. It is not used for recordings, it is only used for Live TV on the IP STB. Period.

Now, one question that occurred to me after I’d left the show today was if a tuner is paired with a single IP STB, or if it can be shared. Say you have one XL4 and three IP STBs – can you reserve just one tuner which would allow any one of the three IP STBs to use Live TV at a time? I’ll need to ask that.

But, that aside, you can see that you have the option to reserve 0, 1, or 2 tuners for use by IP STBs. Personally I’d go with 0 as I never use Live TV and would only want the IP STB to access my recordings or OTT content. I think this will make a number of people happy. Also, this is a settings screen on the XL4 and you can change this whenever you want. So it isn’t something you have to do at setup, etc. So if you know you want to watch Live TV in another room (the game is on, you’re sick in bed, whatever) you can reserve a tuner and then un-reserve it when you no longer need it.

Speaking of setup, there apparently really isn’t much of one on the IP STB. Setup basically involves ‘pairing’ it with the XL4 – and that’s it. There’s nothing else to setup, it pulls all of the settings it needs from the XL4. I’m told there are very few settings local to the IP STB.

I did confirm that the will not pair with the Premiere or Premiere XL at launch, only the Premiere XL4 (aka the Premiere Q for MSOs). So no Live TV on your IP STB if that’s all you have. And this isn’t a ‘soft’ thing where it isn’t officially supported but you can make it work, the software is just not there to support it on those units. However, the IP STB is a standard Multi-Room Streaming (MRS) client. It can stream content of of any Premiere unit in the home. So it does work with the Premiere and Premiere XL in as far as you’ll be able to stream your recordings via MRS. My understanding is that you will not be able to set recordings on the Premiere or Premiere XL, etc., as that requires the pairing that can only be done with the XL4. Basically whatever you can do with MRS between Premieres today you can do from the IP STB, but that’s all – for now at least. (I’m going to double check to make sure that’s accurate.)

As for pricing – again, they haven’t said yet. We don’t know if they’ll be a one-time purchase, or if there will be a subscription required, etc. Personally I expect them both to be one-time purchases with no subscription requirement. But they will need to be activated on the TiVo account so that they get the same MAK and can connect to the TiVo DVR units on the network.

I did have an idea which I suggested to TiVo – parental lock down on the IP STB. Basically ‘KidZone’ on a per-box basis. My idea is that you could put an IP STB in the kids’ room and lock it down so it can only access a wall garden of recordings and channels, just like KidZone did. You’d be able to (dis)allow functions – so the kids couldn’t delete recordings, or cancel them, or setup new recordings, etc. Whatever power you want to give them. Basically they’d have their own Nerfed virtual TiVo.

Enough about the IP STB, how about the TiVo Stream? The Stream will transcode at native resolution. So the 1080i recording remains 1080i as H.264, and the 720p recording remains 720p as H.264, etc. So it isn’t fixed, or limited to 720p, etc. And side-loading happens at better than real time. I was told ’2x’ is a good rule of thumb – so a 30 minute recording will side-load in 15 minutes, etc. But this varies depending on the bit rate of the source material. A 19mbps minimally compressed HD ATSC stream will probably take closer to real time, while a 2mbps highly compressed SD digital cable recording will likely side-load very quickly. In other words, results will vary, but it isn’t stuck with only doing real-time transcodes for side-loading.

Right now the TiVo Stream will only stream content from a TiVo DVR to one of the TiVo client apps on iOS or Android. TiVo hasn’t announced anything for other platforms at this time. I don’t know if we might see an updated version of TiVo Desktop that would support streaming to a PC, though it may make more sense to just add MRS to TiVo Desktop to allow it to stream content to a TiVo as well as from one. And PCs can handle MPEG-2, so I don’t see the need for a TiVo Stream for that.

Lastly, this won’t be news to regular readers of this blog, but the Stream is powered by a Zenverge ZN200 chip. I speculated to that effect last year, and TiVo confirmed it for me in February, but today it was officially announced via press release. The release is below:

Based on the industry leading Zenverge TransAll™ Transcode engine, TiVo Stream will allow a viewer to seamlessly stream or download multiple live or recorded shows from a TiVo Premiere DVR to multiple devices like iPads or iPhones simultaneously. Its unique fast side-load capability is a critical element of a true on-demand experience and allows users to quickly download favorite shows to their tablets for later viewing.

This product takes advantage of the Zenverge TransFormat™, TransRate™, and TransScale™ functions to convert broadcast content into the format supported by tablets and smartphones. TransZip&treade allows side-loading DVR content at a high speed into mobile devices for sync-n-go. Lastly, TransCrypt&treade ensures that live and DVR content can be securely distributed in the home.

“Cable MSOs are keen to extend the whole home experience beyond the TV to include mobile devices,” said TiVo’s David Sandford, Vice President and General Manager, Service Provider Business. “Using the unprecedented quad HD transcoding capabilities of the Zenverge ZN200, we are bringing the unique TiVo experience that consumers love to the mobile screens.”

“We’re excited to work with TiVo on extending their premium TV viewing experience to second screens as they pioneer yet another blockbuster entertainment product following their success with the DVR,” said Zenverge’s Raghu Rao, Executive Vice President of Sales and Business Development. “TiVo Stream will enable service providers using TiVo’s innovative advanced TV solutions to create a compelling anywhere, anytime, any device experience for their customers.”

Zenverge’s Advanced Content Networking ICs are the preferred transcoding solution for operators and box manufacturers for devices such as Gateways, DVRs, and IP/Broadcast streaming adapters.