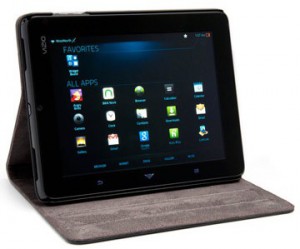 . This is an Android 2.3 Gingerbread tablet which is really designed to be a TV companion, unsurprising for Vizio as they’re best known for their HDTVs.

As it is designed to be a TV companion it includes an IR blaster and, to take advantage of this, it includes a universal remote control app. So it isn’t just an Android tablet, it is a tablet remote for your A/V systems. As an entertainment focused device it includes SRS TruMedia Audio and an HDMI port for displaying content on your big screen. And the UI is based on the Vizio Internet Apps, or VIA, system found on their HDTVs. Connectivity is via 802.11b/g/n and Bluetooth. Amazon sells the tablet alone new for $299.99 and the folio case for $32.61. So this is a $332.60 value for half price.

MegaZone is the Editor of Gizmo Lovers and the chief contributor. He's been online since 1989 and active in several generations of 'social media' - mailing lists, USENet groups, web forums, and since 2003, blogging.    MegaZone has a presence on several social platforms: Google+ / Facebook / Twitter / LinkedIn / LiveJournal / Web.    You can also follow Gizmo Lovers on other sites: Blog / Google+ / Facebook / Twitter.
View all posts by MegaZone →
This entry was posted in Android, HDTV and tagged android, Gifts, sale, Vizio, Woot. Bookmark the permalink.
Performance Optimization WordPress Plugins by W3 EDGE