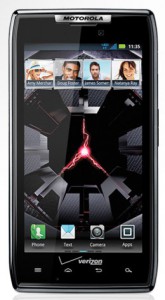 Basically this is a totally kick-ass Android smartphone. I’m personally debating if I want to get one or wait for the Samsung Galaxy Nexus, and it isn’t an easy choice. My fiancee almost ordered a RAZR earlier tonight to replace her OG Droid – but didn’t pull the trigger. Which might have been a good thing.

But Amazon is doing something a little crazy. This is a brand new phone, easily the top end phone for Verizon’s 4G LTE network and one of the best smartphones on the market. Full off contract pricing is an insane $799.99! Normal two-year contract pricing, as I said, is $299.99. But, in honor of 11/11/11, Amazon is offering it to new customers for only $111.11 with 2-year contract! That’s $188.88 off Verizon’s price for a phone launching today. Existing Verizon customers who are up for renewal can get it for $249.99. And if you want it without a contract you can have it for only $749.99 – ouch.

If you’ve been thinking of switching to Verizon, this is an incredible deal. You can get the top end Android smartphone for the cost of an entry level model. Don’t pass this up!

The latest television teaser is also pretty slick. Like past Droid commercials, it is more like the trailer for the latest action flick.