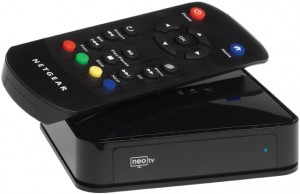 Last October Netgear launched the NTV250 Roku Player, licensing the platform from Roku. Apparently that didn’t work well for Netgear, and now they’re back with the NeoTV NTV200 Streaming Player which appears to have a home-grown OS. They’ve kicked out a press release to announce the launch. And it looks pretty much like Roku’s boxes, or an Apple TV. Basically it is a little square black puck with a remote. The box itself is very simple; you have a power connection, Ethernet, HDMI, and S/PDIF digital audio optical port. And that’s it. Being a Netgear product it also has 802.11b/g/n WiFi which supports up to 300Mbps. Giving the compatibility and the speed it is 2.4GHz single-band 802.11n.

The highlights are Netflix, Vudu, YouTube, Pandora, Napster, Flingo, and gaming. Yes, it seems like everyone is getting into the casual gaming on TV thing. They don’t have a full list of available channels, but the product images show Facebook, Twitter, Flickr, Picasa, Vimeo, Revision3, Blip.tv, TMZ, TED, Howcast, Crunchyroll, The Economist, and more. And note that Vudu support is more than just Vudu Movies, it also includes Vudu Apps. So that’s a whole suite of apps in addition to whatever they support natively.

The other big trick up the NeoTV’s sleeve is smartphone apps for both iOS and Android. You can use your smartphone as a remote control and it appears there will also be some social media integration from the Smartphone interface, such as sharing what you’re watching on Facebook. If you’re interested in more, check out the product page.

The Netgear NeoTV NTV200 is available for pre-order at Amazon for $79.99. It looks like a decent little box, but they’re got a big mountain to climb if they want to knock Roku off their perch. This is a good product, but is it better than Roku? I don’t know, I kind of doubt it. And there is the question of whether Netgear will stick with it and keep adding channels and features. After all, they dropped their Roku-based box pretty quickly. Between Roku, AppleTV, and a Google TV platform about to be reinvigorated with the Honeycomb update, they’ve got their work cut out for them to carve a niche. Boxee, Popcorn Hour, and others have already struggled to do so. 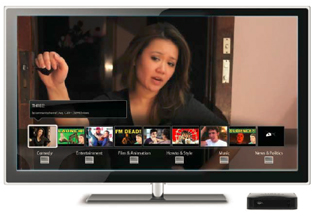 Sidenote, I’m amused that I immediately recognized the image they’re using for their YouTube feature as Natalie from Community Channel.