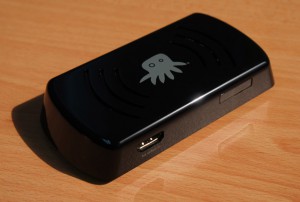 We recently saw Chumby moving into the connected TV app space as an app platform included on the TiVo Design Insignia cTVs. Chumby is continuing their move in that direction with the NeTV, a simple little box that connects in-line in the HDMI connection from your video source to your TV. Using it’s position as man-in-the-middle the NeTV is able to overlay content directly onto the video your watching – such as a news ticker along the bottom of the screen, or display photos, web pages, etc., from your Android device, and more.

This video from Chumby illustrates some of the features (there is no sound, FYI):

The NeTV is a very simple little Linux computer with HDMI in, HDMI out, and IR receiver for the remote, power via a microUSB connection (like most phones these days), a setup button, and 802.11g WiFi for connectivity. It looks like it is using microSD for storage, but the slot is not accessible from the outside. There is no Ethernet port, but according to the developer information the microUSB port configures itself as an Ethernet device. Perhaps some kind of Ethernet dongle will be released for those who don’t want to use WiFi. The limitation of 802.11g is disappointing. I’m sure it is a cost-cutting measure, but I’m in the process of trying to eliminate all 11g devices from my home as I’m upgrading to 11n and if I can drop 11g compatibility it will improve performance.

Interestingly the NeTV does not use Flash, as all other Chumby devices have. It is an HTML5 device using a Webkit-based browser. That means that it will not run existing Chumby apps, as they’re all Flash-based. There are some other interesting tidbits in the NeTV forum.

Via Zatz Not Funny.

MegaZone is the Editor of Gizmo Lovers and the chief contributor. He's been online since 1989 and active in several generations of 'social media' - mailing lists, USENet groups, web forums, and since 2003, blogging.    MegaZone has a presence on several social platforms: Google+ / Facebook / Twitter / LinkedIn / LiveJournal / Web.    You can also follow Gizmo Lovers on other sites: Blog / Google+ / Facebook / Twitter.
View all posts by MegaZone →
This entry was posted in Blogs, Broadband, HDTV and tagged Blogs, Chumby, HDTV, Video, YouTube, Zatz Not Funny. Bookmark the permalink.
Performance Optimization WordPress Plugins by W3 EDGE