The 737 MAX, The World’s First Zero Calorie Airliner… Wait, no…

Posted on Saturday, September 3, 2011 by MegaZone 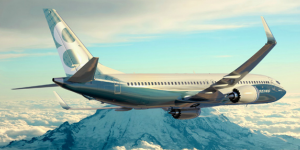 Boeing last week officially launched a new generation of the venerable 737, the unfortunately named 737 MAX. Seriously, that’s what they’re calling it. As you might be able to tell, I’m not all that fond of the name.

Against newer Boeing names like the B787 Dreamliner or the B747-8 International, and lofty names of old like Stratocruiser and Stratoliner, ‘MAX’ just seems like a cold marketing name out of a focus group. And it plays right into the marketing message, which is that it offers “max efficiency, max reliability, max passenger appeal”.

But all I can think of is Pepsi MAX. Other options like B737NE (for New Engine) or B737RE (for Re-Engine) sound better to me. Or how about B737 LEAP, in light of the engine choice? Eh, maybe MAX will grow on me.

Anyway, naming aside, the B737 MAX is Boeing’s answer to the Airbus A320NEO, or New Engine Option. With today’s higher fuel costs, and stricter environmental regulations, airlines are looking for more efficient aircraft to reduce costs and emissions. Boeing had been pursuing a New Small Airplane, or NSA, with service entry around 2020. But Airbus launched the A320NEO as a minor update to the A320 family, with the largest change being new engine options – the CFMI LEAP-X1A or the P&W PW1100G Geared Turbofan (GTF). The NEO is expected to offer ~16% lower fuel burn and ~20% lower maintenance costs than today’s A320 family. The NEO has been a smash success in the market, with a large number of orders, so Boeing was forced to go with a more expedient solution of updating the B737, pushing the NSA out into the future. Most likely we won’t see a new single-aisle until the 2030 time frame now. 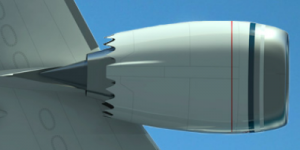 While Airbus is offering a choice of two engines, Boeing has had great success with the sole-sourced CFMI CFM56 on the B737 Classic and NG, so the B737 MAX will be available with only the CFMI LEAP-X1B. The most visible difference on the new MAX line will likely be the chevron-edged nacelles, as seen in the photo, first introduced in the B787 and also found on the new B747-8. Boeing is claiming that the MAX will offer a 10-12% fuel burn improvement over today’s 737NG and a 16% improvement over today’s A320. Perhaps more importantly, they claim they’ll have a 4% fuel-burn advantage over the A320NEO.

Boeing has been making exclusive engine deals increasingly on newer models. The B737 has always been a single-option airliner. While earlier models of the B777 were available with engines from GE, Pratt & Whitney, or Rolls-Royce, later models are available only with GE90 powerplants. Similarly GE, P&W, and RR offered engines for earlier models of the B747, but the new B747-8 is available only with GEnx powerplants. The major exception is the new B787 which is available with GEnx or RR Trent 1000 power. It has been a good run for GE – they’re a major partner in the CFM International consortium, so they’re basically the sole provider for newer models of B737, B747 & B777, and the majority of B787 customers have specified GEnx.

(Historically this is somewhat ironic. P&W’s parent company is United Technologies. Way, way back, Boeing, United Technologies, and United Airlines were all part of one conglomerate. Vertical integration and all, until they were broken up. But these days Boeing works most closely with GE and P&W isn’t found on any of their latest models.)

I’m a little disappointed that we won’t be seeing a brand new jet in this category soon, at least not from Boeing or Airbus. The Chinese Comac C919 is on the way, but it won’t be anything radically new. And the Bombardier C-Series is a category down from the B737 & A320. It would’ve been nice to see something radical like a blended wing body or open rotor propulsion, but that’ll have to wait for the next generation it seems.

As a bit of a ‘bonus video’, this is how airlines shop for all the bits that go inside their fresh new airliner. Seats, entertainment systems, galleys, lavatories, etc. Well, it is how they shop for the B787 specifically, but this ‘one-stop shop’ approach is expected to spread.

MegaZone is the Editor of Gizmo Lovers and the chief contributor. He's been online since 1989 and active in several generations of 'social media' - mailing lists, USENet groups, web forums, and since 2003, blogging.    MegaZone has a presence on several social platforms: Google+ / Facebook / Twitter / LinkedIn / LiveJournal / Web.    You can also follow Gizmo Lovers on other sites: Blog / Google+ / Facebook / Twitter.
View all posts by MegaZone →
This entry was posted in Aerospace and tagged A320, Airbus, B737, B737 MAX, B747, B747-8, B777, B787, Boeing, CFMI, LEAP-X, Video, YouTube. Bookmark the permalink.
Performance Optimization WordPress Plugins by W3 EDGE