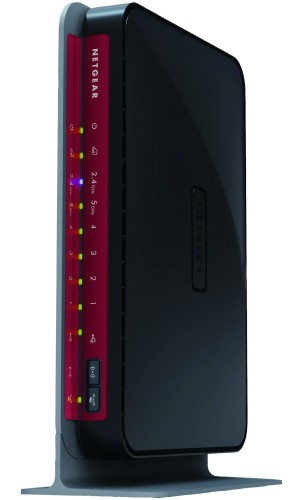 It is the first consumer router to include Clear Channel Selector and the first to include Netgear’s ReadySHARE Cloud service. As they describe it:

Clear Channel Selector, previously available only in more costly wireless routers for businesses, automatically detects when the WiFi channel currently in use becomes overcrowded and switches to another less-crowded channel. WiFi overcrowding is a growing problem as the number of WiFi access points proliferates and there’s more competition for WiFi frequencies from household devices such as microwave ovens, cordless phones, baby monitors and from neighbors. Clear Channel Selector creates a more reliable home WiFi network by greatly reducing sudden disconnects and slowdowns, especially important for demanding applications such as HD video streaming, multi-player gaming and online voice or video chats.

ReadySHARE Cloud transforms a USB hard drive or flash drive plugged into the USB port of the N600 Premium Edition into a private “cloud” storage system for securely accessing and sharing files within the home network or across the Internet. There’s no need to go through the lengthy process of selecting a public file-sharing site and then uploading files, and no worries about privacy policies or what happens if the service suddenly goes out of business. Instead, ReadySHARE™ Cloud makes it easy to designate which files and folders on the USB drive can be shared. These shared files can be accessed from any computer with an Internet connection, as well as through apps from NETGEAR for iPhone, iPad, iPod Touch, Android smartphones and Android tablets.

The router also has a USB port on the back which can be used for a USB drive or a USB printer, both of which can be shared over the network for other devices. When USB storage is attached the router acts as a Netgear ReadyNAS storage device and it even has built-in DLNA streaming to share your media with DLNA-enabled devices, like the PS3 and many Blu-ray players.

It also has support for TiVo. A built in TiVo HMO server allows it to stream music and photos to your TiVo. But it also seems to act as a TiVoToGo client and“a USB drive connected to the router can serve as extra storage for TiVo video recordings.” Of course, you’d only be able to copy shows to the attached storage if they’re not copy protected on the TiVo. You can also play content from the router attached storage on the TiVo.

Those with a hacking bent will like it because it is an open platform and can readily run DD-WRT, OpenWRT, and Tomato firmware.

The Buffalo Technology N600 that I just ordered for myself have very similar specs, and it is only $89.99 at Amazon. The Netgear has a few more bells and whistles, but personally I don’t think they’re worth $60. If I’m going to use network storage I’d want something with RAID, like Drobo. But if the extra features are worth it to you, it looks like a good product. I’m happy with the Buffalo units I’ve ordered.