All the Blu-ray stats you never wanted 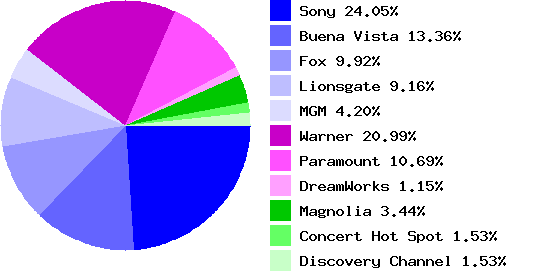 Blu-rayStats.com is a very simple website that provides exactly what its name implies – Blu-ray Disc statistics, and lots of them. You can find information on (apparently) every BD release – studio, release date, IMDB rating, the US Box Office figures, the video and audio codecs used, the type of disc (BD25 or BD50), if the disc is region coded, and the MSRP. You can slice and dice the data by studo, codec, etc. And you can get some graphs, like one above.

An interesting site for people who like raw data. I don’t know if the site has any affiliation – the domain is registered to Dave Cowl of Rhobot Corp in Sunnyvale, CA, and it was registered on July 4th, 2007, so it is new.

I picked this up from EngadgetHD.

MegaZone is the Editor of Gizmo Lovers and the chief contributor. He's been online since 1989 and active in several generations of 'social media' - mailing lists, USENet groups, web forums, and since 2003, blogging.    MegaZone has a presence on several social platforms: Google+ / Facebook / Twitter / LinkedIn / LiveJournal / Web.    You can also follow Gizmo Lovers on other sites: Blog / Google+ / Facebook / Twitter.
View all posts by MegaZone →
This entry was posted in Blu-ray/HD DVD. Bookmark the permalink.
Performance Optimization WordPress Plugins by W3 EDGE