A Winglet By Any Other Name

Airbus is launching a new winglet design for the A320 which they’ve dubbed ‘Sharklets’. Personally I hate the name, it sounds like someone let marketing run wild. They’re winglets, plain and simple. They’re basically Airbus’s version of the blended winglet, like those on the Boeing 737. (Note I’m not saying they copied Boeing, each winglet design is tailored for the aircraft it is on. They’re not the same, they just have a similar appearance.)

I don’t think the Sharklets really look very much like a shark’s fin either. Consider these grabs from Airbus’s own video: 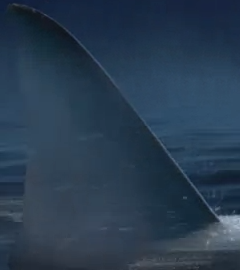 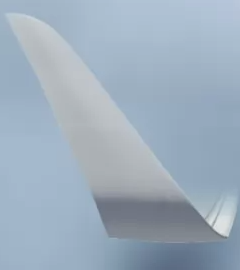 I suppose the leading edge profile is somewhat similar – of course that’s a CG fin which I’m sure was designed to match the Sharklet design. OK, enough harping on the name. It just makes me cringe each time I see it.

So anyway, they’re launching these new wing… er, Sharklets, with the first new build A320 produced with them. They’ve released a couple of videos to coincide with the launch.

But Airbus isn’t the only vendor unveiling a new winglet design, Boeing has unveiled their new ‘dual-feather’ winglet design for the B737 MAX which they’re calling MAX AT (for Advanced Technology) winglets. It’s a fairly different take in winglet design, with two pieces – one up-swept like a traditional winglet, and a second angled downward. It looks a bit like the Blended Split-Tip Scimitar Winglet concept unveiled by Aviation Partners last year, but only superficially. Boeing’s design seems to be a blend of a raked wingtip, as used on the B737-based P-8A Poseidon, with significant added anhedral, and the blended winglet they’ve been using.

They’ve released a video showing the updated B737 MAX design:


The video features the dual-feather winglets, but also reveals a few other details of the evolving design. The fan size of the CFMI LEAP-X1B has been increased, which has necessitated lengthening the nose gear to maintain ground clearance. The longer nose gear wouldn’t fit in the existing nose gear bay and rather than make extensive engineering changes to the nose section they’ve added a small ‘blister’ to enclose the longer gear. The solution is similar to what Airbus did on the A330F, as it required a longer nose gear to level the load floor. The B737 MAX also features a revised tailcone for reduced drag and a number of other detail changes.

MegaZone is the Editor of Gizmo Lovers and the chief contributor. He's been online since 1989 and active in several generations of 'social media' - mailing lists, USENet groups, web forums, and since 2003, blogging.    MegaZone has a presence on several social platforms: Google+ / Facebook / Twitter / LinkedIn / LiveJournal / Web.    You can also follow Gizmo Lovers on other sites: Blog / Google+ / Facebook / Twitter.
View all posts by MegaZone →
This entry was posted in Aerospace and tagged A320, Aerospace, Airbus, B737 MAX, Boeing, Sharklets, Video, YouTube. Bookmark the permalink.
Performance Optimization WordPress Plugins by W3 EDGE