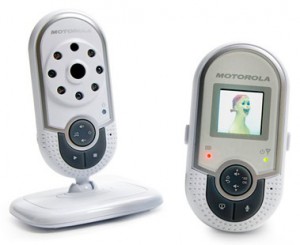 Today’s Kids.Woot! deal is aimed at the new parent – or perhaps someone looking for a nifty remote spy cam. The Motorola Digital Video Baby Monitor with DECT, Night Vision & Color LCD Screen is only $69.99 + $5 S&H

. The receiver has a 1.5″ LCD screen while the camera in the transmitter has infrared night vision. Of course it also has a sensitive mic so you can listen on on your target, I mean, the baby. And all of this is encrypted and transmitted wirelessly using 1.9GHz DECT 6.0. You can also use them as a two-way intercom and there are five lullabies built right in, in case the tyke starts waking up. And if you wander out of the 200 meter range, the receiver will warn you.

MegaZone is the Editor of Gizmo Lovers and the chief contributor. He's been online since 1989 and active in several generations of 'social media' - mailing lists, USENet groups, web forums, and since 2003, blogging.    MegaZone has a presence on several social platforms: Google+ / Facebook / Twitter / LinkedIn / LiveJournal / Web.    You can also follow Gizmo Lovers on other sites: Blog / Google+ / Facebook / Twitter.
View all posts by MegaZone →
This entry was posted in General Tech and tagged Gifts, Kids.Woot, Motorola, sale. Bookmark the permalink.
Performance Optimization WordPress Plugins by W3 EDGE