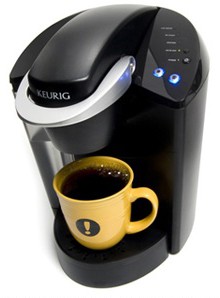 Today’s Sellout.Woot! deal is one I personally wholeheartedly endorse, a refurbished Keurig Elite B40 Gourmet Single-Cup Home Brewing System for only $69.99 + $5 S&H

I own a conventional coffee pot, but I really never use it. I don’t drink enough coffee to warrant brewing even a partial pot, so it is just a waste and more hassle than it is worth. I don’t even bother keeping coffee grounds in the house anymore. Indeed, I prefer tea most of the time, coffee some of the time, and a variety instead of the same thing every time. Last xmas my fiancee gave me a Keurig MINI Plus Brewing System, which is the simplest of their brewers, to try it out. I love it. It is simple and easy to use. No mess, no clean up, a fresh cup of coffee or tea in a couple of minutes, and I keep a variety of K-Cups on hand so I can pick and choose what I want at any point in time. And no wasted coffee. I like it so much that I put its big brother, the Keurig B-70, on our wedding registry.

The Keurig Elite B-40 being offered by Sellout.Woot! is a mid-range model which Amazon sells new for $129.99, so this is a $60 savings – nearly half off. $69.99 is less than the basic Keurig MINI Plus that I have sells for. There is a huge variety of K-Cups – coffee, tea, herbal tea, hot cider, cocoa, even ‘brew over ice’ coffees and teas for warm weather.

It isn’t a DVR or a smartphone, but it is one gizmo I personally recommend.

MegaZone is the Editor of Gizmo Lovers and the chief contributor. He's been online since 1989 and active in several generations of 'social media' - mailing lists, USENet groups, web forums, and since 2003, blogging.    MegaZone has a presence on several social platforms: Google+ / Facebook / Twitter / LinkedIn / LiveJournal / Web.    You can also follow Gizmo Lovers on other sites: Blog / Google+ / Facebook / Twitter.
View all posts by MegaZone →
This entry was posted in General and tagged Gifts, Keurig, sale, Sellout.Woot. Bookmark the permalink.
Performance Optimization WordPress Plugins by W3 EDGE