NASA Unveils Their Next Launcher, the Space Launch System

Posted on Thursday, September 15, 2011 by MegaZone 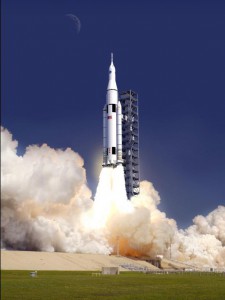 NASA has unveiled the conceptual design for their new launcher, replacing the Ares I and Ares V of the cancelled Constellation program. Frankly, I’m disappointed, but not surprised. The overall design is clearly a reduced cost version of the Ares V. It recycles some of the components from the Ares V, such as the five segment solid rocket boosters (themselves derived from the four segment Shuttle SRBs) and the J-2X upper stage engine. But whereas the Ares V was planned to use five or six RS-68B engines with over 700,000 pounds of thrust each, the SLS will use five RS-25 engines with about 400,000 pounds of thrust each. This means that while the Ares V was to be capable of lifting 188 metric tons (414,000 pounds) to LEO, the first version of the SLS will lift only 70 metric tons (154,000 pounds) and even the evolved SLS will lift only 130 metric tons (286,000 pounds).

The SLS will initially use the RS-25D, also known as the SSME – or Space Shuttle Main Engine. NASA has a stockpile of these from the shuttle program. Later this will change to a cheaper RS-25E, or expendable, version. Whereas the RS-25D was reused on multiple shuttle flights, engines used on the SLS will be discarded. So there is no need to build the engines to higher standards for reusability. NASA is only using the RS-25D initially since they already have a stockpile of them and with the retirement of the shuttle they have nothing else useful to do with them. The RS-68B the Ares V was to use would’ve been a version of the RS-68/68A already in use on the Delta IV launcher, designed to be expendable.

Most of the increased lift from the evolved version of the SLS will come from new rocket boosters. NASA is expected to compete the design of the new boosters, which could be liquid or solid fueled. But that is still a ‘when and if’ question, since they need to get the initial design off the ground first.

At least the Air Force picked up the X-37 after NASA dumped it.

With each cancellation the programs have seemed to get less ambitious. No more space planes, reusable launch vehicles, etc. We’re back to the gumdrop on a stick capsules. Much of the technology in the SLS can trace its development right back to the Apollo program, and the rest is a pretty direct link to the shuttle. There’s not much that can be considered new. That’s safe and (relatively) cheap, but not all that inspiring, at least to me. The first generation SLS reminds me very strongly of the aborted Ares IV concept, which would’ve been kind of a combination of the lower stages of the Ares V and the upper stages of the Ares I.

Frankly I’m a lot more inspired these days by what’s going on in the commercial sector. And I don’t me the traditional giants like Boeing, Lockheed, Ariane, the Russians, etc. But the space start ups that are doing new things. Blue Origin and their New Shepard, as well as their other projects. Sierra Nevada and their Dream Chaser space plane (based on concepts from the cancelled NASA HL-20). But most especially Elon Musk’s SpaceX and their Falcon launchers and Dragon capsule.

SpaceX’s Falcon Heavy is being designed to lift 53 metric tons to LEO. With concepts for the Falcon X Heavy and Falcon XX lifting 125 and 140 metric tons, respectively. While those are still concepts the Falcon 9 has already flown, and the Falcon Heavy is a direct evolution of the Falcon 9 (it was formerly known as the Falcon 9 Heavy) and it is in active development. While it won’t lift even as much as the first generation SLS, I find it more inspirational because it is a small private company developing everything from scratch. There is no legacy technology in the Falcon program, they’ve been inventing a new generation of rocket technology. And so far they’ve been very successful.

While the SLS will surely be a very impressive vehicle if it ever flies, don’t get me wrong, right now that is a very big if given NASA’s track record with programs. I’m not sure we wouldn’t be better off giving the money to companies like SpaceX to accelerate development of vehicles like the Falcon XX. Given their track record on the Falcon 1, Falcon 9, and Dragon to date we might get more for less.