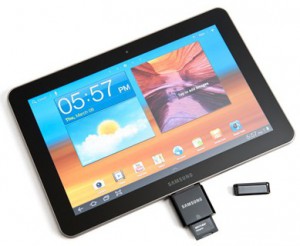 To go with that Galaxy Tab 10.1, and provide more storage, they’re also offering a new Samsung Galaxy Tab SD Card Reader for only $10

. As pictured above, the card reader connects to the 40-pin port on the tablet and enables the use of SD & SDHC cards, as well as microSD & microSDHC via the included adapter. Given the low pricing, and the 16GB of storage in the tablet, I’d strongly advise spending the extra $10 to pick one up. And if you already own a Galaxy Tab and want a way to use SD cards, this is your deal.

. This is a lower-end Android tablet, running Android 2.3 Gingerbread. The 8″ screen is 1024×768, and it has a 1GHz CPU, 512MB of RAM, and only 4GB of on-board storage – though there is a built-in microSD slot for up to 32GB of additional storage. So it isn’t a power house, but this tablet’s differentiator is the built in IR blaster. Yes, it is really designed to be used like a large, touch screen remote control for your home entertainment system. The tablet includes the V.I.A. (Vizio Internet Apps) Plus interface and it comes pre-loaded with a number of universal remote app covers to make it easy to start using it as your remote control.