TiVo Wants To Give You Gas 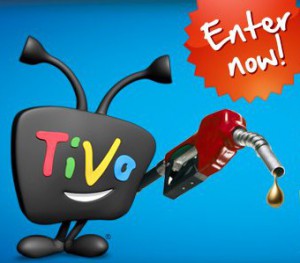 TiVo is running another sweepstakes, this one is dubbed TiVo’s Big Gas Sweepstakes. You can enter the sweepstakes via TiVo’s Facebook page, but it is probably easier to just do it through sweeps.tivo.com. The sweepstakes began on 4/17/12 at 12:00:00 PT and ends on 5/17/12 at 20:59:59 PT.

As you might expect, this time around they’re giving away gas – or, rather, $1000 in gas cards. Four people will each win ten $100 Chevron gift cards. It looks like they’ll work at Texaco as well, as Chevron and Texaco are sister companies. Which would be good for me if I win; there are no Chevron stations in my area, but there are a few Texaco stations.

In connection with the sweepstakes, TiVo is also running a promotion – purchase a new $149.99 TiVo Premiere with $499.99 product lifetime service or a one-year commitment to $14.99 monthly service, and receive a TiVo 802.11n WiFi adapter free. See www.tivo.com/freeadapter for details. TiVo calls it an $89.99 value, but that’s the full MSRP. Amazon has them for $64.50.

The sweepstakes is open to everyone, so you may as well enter. Even if you don’t have a car you can always sell the cards to someone else for less than face value. Selling them for 75 cents on the dollar still nets you $750, and the buyer saves 25% on gas.

MegaZone is the Editor of Gizmo Lovers and the chief contributor. He's been online since 1989 and active in several generations of 'social media' - mailing lists, USENet groups, web forums, and since 2003, blogging.    MegaZone has a presence on several social platforms: Google+ / Facebook / Twitter / LinkedIn / LiveJournal / Web.    You can also follow Gizmo Lovers on other sites: Blog / Google+ / Facebook / Twitter.
View all posts by MegaZone →
This entry was posted in TiVo and tagged Sweepstakes, TiVo. Bookmark the permalink.
Performance Optimization WordPress Plugins by W3 EDGE