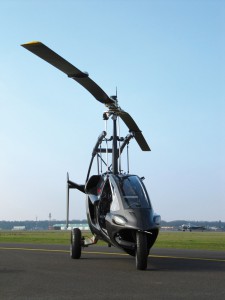 Flying cars have been capturing the popular imagination for decades, but none of the attempts have every proven to be practical, or at least not commercial successes. A couple of well known examples of past attempts are the Fulton Airphibian, the ConVairCar, but the most well known is probably the Aerocar. The most infamous of them all is the Moller Skycar, which has been vaporware for four decades. None of them succeeded – but it hasn’t stopped people from continuing to dream and to look for new ways to tackle the problem.

Solutions mainly fall into two categories – flying cars and roadable aircraft. A flying car is a car first and an aircraft second. It is meant to be driven regularly and occasionally flown. Since the design will always be a compromise flying cars favor the car side of the equation. Roadable aircraft are just the opposite, of course. They’re aircraft first and cars second. They are not meant to be driving on a regular basis. Rather the ability to drive on public roads is really for convenience, and the main function is flight. You’d normally only drive such a vehicle from your home to the airfield for departure. Then, upon arrival at your destination, you’d be able to drive off the airfield to where you need to go.

The real advantage is not having to have a place to park your plane at the local airfield – you can drive it home and keep it in your garage. You don’t need to leave a car at the airport when you go on trips, or take a cab or car service there. And the same at the destination, you can take a trip and drive to your business meeting, hotel, etc. No need to book a car or take a cab. And if inclement weather grounds you, you can drive as a backup plan rather than having to cancel your trip. And once you’re through the bad weather you can go to the nearest airfield and take off again. But the compromise on these vehicles really leans toward the aircraft side, so they’re not meant to be your daily driver.

It is this compromise, in either direction, that has long been the Achilles heel of such designs. Aircraft need to be strong and light, and have weight and balance requirements to be able to fly properly. Cars on the other hand tend to be heavy and rugged to withstand the abuse of bumps and potholes, not to mention all of the crash worthiness features which add a lot of weight. But newer materials, such as composites, are opening up possibilities for strong yet light designs which can meet automotive crash standards yet still allow for flight.

The best known current effort is actually a roadable aircraft, the Terrafugia Transition. Or, as they like to call it, a “Street-Legal Airplane”. There’s no hiding what it is; when it ‘car mode’ you can still clearly tell it is an aircraft. The production model prototype just made its first flight on March 23rd, 2012 and they released this video: 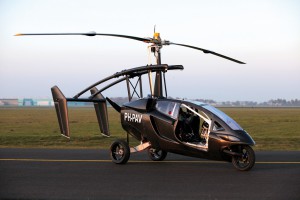 The Transition is certainly a major achievement, and it has a shot at market success, but I think another new vehicle is more interesting. The PAL-V ONE, or Personal Air and Land Vehicle, is more of a true flying car. Well, actually, as a three wheeler it would be a flying motorcycle in the US. (That varies country to country.) There is a flying prototype and it is much less obvious in car mode that it is a flying machine. One reason for that is that, unlike the Transition, which is a fixed-wing aircraft, the PAL-V ONE is rotary-wing craft – an autogyro, or gyroplane, to be precise. Note that it is not a helicopter – there is a difference. 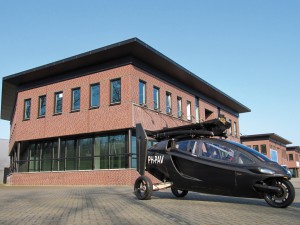 The rotor blades are much smaller than a fixed wing, which means they’re easier to stow and hide. And the PAL-V ONE has a pretty clever layout with the tail surfaces telescoping over the body, with the rotors folded back. The prototype is a little rough, but the renders of the intended final design look like they plan to clean things up a bit for production.

I rather like the Dutch government’s concept of building small takeoff and landing sites alongside highways. Because of the autogyro’s ability to takeoff and land in very short distances they’d only need to be about 100 meters long. The concept looks much like a rest area or scenic overlook alongside US highways.


The three wheel leaning design immediately brings to mind the old General Motors Lean Machine that I used to see at GM’s World of Motion at Walt Disney World’s Epcot Center before it was remodeled. I always wanted one:


Though the design is really closer to that of the Carver One, which is no coincidence and the PAL-V One licenses the Dynamic Vehicle Control (DVC) technology developed for the Carver One as the basis for it’s tilting system when driving:


Though you can clearly see the PAL-V ONE uses a different implementation. Whereas the Carver One’s rear wheels always remain perpendicular to the ground and the power system is kept fixed and level, the PAL-V ONE uses an independent rear suspension that allows each rear wheel to flex independently and lean into the turn, and the engine is contained within the leaning unibody design.

I would love to have one of these, it’d give me a reason to dust off the private pilot’s license I haven’t used since the early 90s (of course I’d have to get autogyro training), but the price is expected to be around $300,000. That’s just a smidgen more than I paid for my house, so that’s probably not going to happen. Still I’d love to see it succeed, even if I can’t afford one.

Oh, and I couldn’t resist: