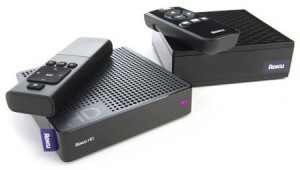 Today Sellout.Woot! is offering your a choice. The deal is a new Roku HD Wireless Streaming Player for only $49.99 + $5 S&H

By way of comparison I’ve included the current Roku LT in the table below, as it lists for the same $49.99 price. Both of the Roku HD models give you wired Ethernet, which is better than WiFi for streaming video and which the LT lacks. The N1000/N1100 also give you Component Video, S-Video, and Optical Audio output, which are absent on the other two units.

Personally, of these three I’d opt for the original Roku HD N1000/N1100. Sure it is a little bit bigger, but it offers more flexibility for connections. If you’re positive you don’t need the extra outputs, the 2000C is perfect for wired Ethernet. Checkout the deal before it is gone.