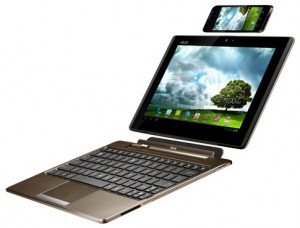 ASUS has been teasing us for a while with the PadFone concept, but now it is official, and coming in April. As a refresher, the idea of the PadFone is to have one computing device – the phone – instead of multiple devices. The phone contains the CPU, RAM, storage, networking (WiFi, Cellular, and Bluetooth), cameras, and the primary display.

When you need a larger display the phone docks with a tablet. But the tablet is really just a screen and larger battery – it has no native processing capability. Instead the phone provides all of the power. That means no need to install apps twice and keep them in sync, or to have two data plans, etc. The tablet is just a ‘sleeve’ for the phone.

ASUS takes this even further with the PadFone, building on their Transformer products, but having the tablet dock with a keyboard. So the phone becomes a tablet becomes a netbook.

The magic happens with DynamicDisplay, a special feature developed by ASUS. It dynamically resizes apps as the PadPhone is docked with or removed from the PadPhone Station. Not only do you get a 10.1″ 1280×800 display, but apps with optimized tablet views, such as Gmail, will change. So you won’t just see the phone display blown up, but the proper tablet view.

When docked, the PadPhone’s camera and flash are still used, but the front camera is replaced by one built into the tablet. What’s not clear from the specs and images is which ports the Station dock has. The keyboard dock looks very similar to the one for my Transformer Prime. Like the Prime’s keyboard it adds additional battery, as well as a full size USB port and full size SD slot.

This looks like a very interesting product. I’m not sure if I’d give up my Galaxy Nexus phone and Transformer Prime tablet for the PadFone, especially since I’ve really only just picked up both. But down the road when my G-Nex is up for replacement I’d certainly look at the then-current generation of the PadFone. This is exactly the kind of design I’ve been waiting for.

ASUS also announced that the Eee Pad Transformer line is bring rebranded as the Transformer Pad, and two new models are being introduced.

Unlike the TF201, the TF700 will also come in HSPA+ and LTE models, which differ in other details. Instead of the NVIDIA Tegra 3 quad-core CPU, these units will use the Qualcomm MSM 8260A/8960 Snapdragon S4 Krait Dual-core clocked at 1.5Ghz. Why? When they started designing this unit the Tegra 3 wasn’t yet paired with 4G chipsets. It seems the TF300 was designed later, as there is no indication the cellular variants of that model will not be using the Tegra 3. Battery life is given as 10/16, which makes sense with the higher resolution screen and higher CPU clock.

I love my ASUS Transformer Prime, and the Transformer Pad Infinity looks interesting. I’d go with the WiFi model since I currently use my Prime with WiFi tethering on my G-Nex.