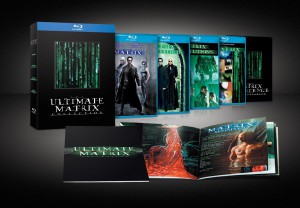 Today’s Amazon Gold Box Deal of the Day is The Ultimate Matrix Collection on Blu-ray for only $25.49. 61% off the $64.98, and $12.50 off the normal Amazon price of $37.99. This is a six disc set with four Blu-rays and two DVDs. The four films and The Animatrix come on Blu-ray, the two DVDs are full of supplemental materials. This is a pretty sweet deal, it is pretty much everything Matrix for the price of one Blu-ray. Get it while you can.

MegaZone is the Editor of Gizmo Lovers and the chief contributor. He's been online since 1989 and active in several generations of 'social media' - mailing lists, USENet groups, web forums, and since 2003, blogging.    MegaZone has a presence on several social platforms: Google+ / Facebook / Twitter / LinkedIn / LiveJournal / Web.    You can also follow Gizmo Lovers on other sites: Blog / Google+ / Facebook / Twitter.
View all posts by MegaZone →
This entry was posted in Amazon, Blu-ray/HD DVD and tagged Amazon, Blu-ray, Gifts, sale. Bookmark the permalink.
Performance Optimization WordPress Plugins by W3 EDGE