Asymco has produced some graphs showing the amazing arc Android growth is on. These are units shipped, not sold, granted, but it is still a comparison between platforms. Smartphone market penetration is now over 30% of the total phone market. Android has a dominant lead with 17.6% of the overall phone market, the iPhone has a quarter of that with 4.4% of the total market. It is rounded out by Symbian with 4.3%, Blackberry with 2.76%, Samsung’s Bada with 1%, and Windows Phone brings up the rear with 0.5%. Android has really had a meteoric rise since it launched three years ago.

Looking at a graph of market share by smartphone vendor, the precipitous decline of Nokia is painfully obvious, and it looks like RIM isn’t doing so well either. On the other hand, you can see the rapid rise of Samsung. Samsung has claimed 26% of the global smartphone market, becoming the largest vendor. Apple slipped from 19% to close to 14%, but that could be due to anticipation of the iPhone 4S (the figures are from before the launch). Nokia has toppled from the top of the heap to under 14% in roughly a year. HTC overtook RIM with 11% to 9% as the former continues to gain market share and the latter loses it. Sony has approximately 6%, LG 5%, and Motorola 4%. 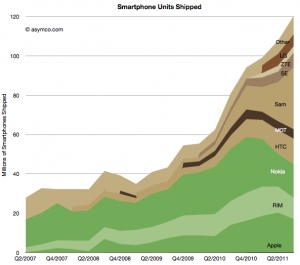 Unsurprisingly the units shipped by vendor closely aligns with the market share of each vendor. The sheer number of devices being shipped is really impressive.