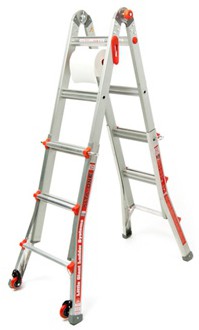 Yes, it is a ladder. I also consider it a gizmo. I own one of these, well, a similar Little Giant model, and it is great. It is one of those crazily adjustable ladders. You can use it as an A-frame step ladder, and the legs extend so you can vary the height. Make it asymmetrical to use on stairs. Open it up 180 degrees to use as an extension ladder. With the legs collapsed and it folded closed it doesn’t take up much space to store. Every home should have a good ladder.

I know too many people just climb up on a chair, or some other furniture, to change a light bulb, smoke detector battery, hang something, etc. Heck, I used to do the same thing – and I also took a few spills and broke some furniture doing it. Sure there are some funny stories – like my roommate standing on a nightstand he thought was wood, but was really particle board with veneer. Next thing he knew he was just a couple of inches off the floor – the top had telescoped straight down into the base and he was standing in the nightstand, not on it. Funny, in an Inspector Clouseau/Buster Keaton way, but only because he wasn’t hurt. But having a real ladder is a better idea, and this is a good ladder. I personally recommend it based on my experience.

The one downside is that these ladders tend to be a bit pricey. Amazon sells another 13′ Little Giant model for $196.99 – and it doesn’t have the wheels, work platform, or paper towel holder. Home.Woot! is selling the Little Giant 13-Foot Ladder with Wheels & Paper Towel Holder for only $149.99 + $5 S&H

. I think it is worth having one. Check out the demo video:

MegaZone is the Editor of Gizmo Lovers and the chief contributor. He's been online since 1989 and active in several generations of 'social media' - mailing lists, USENet groups, web forums, and since 2003, blogging.    MegaZone has a presence on several social platforms: Google+ / Facebook / Twitter / LinkedIn / LiveJournal / Web.    You can also follow Gizmo Lovers on other sites: Blog / Google+ / Facebook / Twitter.
View all posts by MegaZone →
This entry was posted in General and tagged Gifts, Home.Woot, Little Giant, sale, Video, YouTube. Bookmark the permalink.
Performance Optimization WordPress Plugins by W3 EDGE