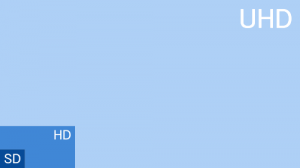 Things have been quiet on the video front for a little while, nothing too major. But in the past week there were two bits of news which give us a look into the future. The biggest, literally, is news on UHDTV. That’s Ultra High Definition TV. While ‘Full HD’ is 1080p, aka 1920×1080, with just over two million pixels, and 4K encompasses several resolutons – from 4096×1714 (around seven million pixels) to 4096×3112 (nearly 13 million pixels), UHD is 7680×4320 or just over 33 million pixels. It has 16 times the pixels of Full HD video. Broadcasting & Cable reports that the ITU Study Group on Broadcasting Services has reached agreement on the most pertinent technical aspects of the UHDTV standards.

But don’t expect a UHD sets to be on the market any time soon. For now it will only be used for special events. For example, there are plans to cover some of the 2012 London Olympic Games in UHDTV for display at other venues. If UHD displays do come home, they most likely won’t be for displaying UHD images, but rather for glasses-free 3D. I was fairly dismissive of glasses-free 3D sets in my rant about the current state of the industry a little while back, mainly because of the compromises required for them to work. But the more pixels on the display, and the more pixels per inch, the more ‘sweet spots’ can be created, allowing for a wider viewing angle. That means less need to sit in specific locations relative to the screen to perceive the 3D effect.

Now, you may think that a 7680×4320 display much be huge, but that’s not necessarily the case. It is a factor of pixels per inch. Consider the iPhone’s retina display with 326ppi. At that density a UHD display would be only 24.5×13.25 inches, that’s only a 27 inch display. Now, that’s an extreme example, but it just goes to show that a UHD display can be scaled to different physical sizes using today’s display technology. Of course, it wouldn’t come cheap.

Ignoring the displays, how would you even get a UHD image? 16 times the pixels would mean, worst case, 16 times the data for the same quality image – all else being equal. Now, in the real world it doesn’t quite work that way since neighboring pixels will share data and it isn’t a linear scale, but let’s go with the worst case for now. How would you ever get that much data? You’d be looking at an 800GB Blu-ray, which is far more than even lab versions have hit.

The good news is everything doesn’t have to be equal. The other recent news is that the Joint Collaborative Team on Video Coding (JCT-VC), a cooperative effort between the International Telecommunication Union and Moving Picture Experts Group, is making progress on the standard for High Efficiency Video Coding, aka H.265. This is expected to be the successor to today’s champ, H.264. The first draft is expected to be released in February 2012, with a final standard in January 2013. H.265 takes advantage of the growth in processor capabilities. It is more computationally intensive than H.264, but should provide compression 25% to 50% better. That could mean that an H.265 UHD image would only have eight times the data as an H.264 1080p image. And with real world compression aspects factored in even less. That starts to bring things into the realm of possibility. Back in 2008 Pioneer demonstrated a Blu-ray disc capable of holding 400GB on 16 25GB layers. And BDXL, which is already a commercial product, holds 100GB/128GB on three or four ~33GB layers. And work is underway to push Blu-ray all the way to 1TB. So by the time UHD displays are viable for the home, we’ll probably have a Blu-ray disc capable of holding UHD content. Streaming? Does your ISP offer Gigabit connections?

But H.265 will have a more immediate impact. You don’t have to be encoding UHD to use it. That 25-50% savings applies to all content. And with mobile data plans all heading to tiered pricing, bandwidth caps on home broadband, and the explosion of streaming HD content, every bit helps. Just think, for the same amount of data you could have up to twice the run time. Of course, even once H.265 is finalized it will probably take a year or two for it to make it into silicon and then into new devices. And you will most likely have to buy a new device to use it. Most devices, like set top boxes and smartphones, implement video decoding in dedicated silicon. So you’d need new hardware to support H.265. Powerful PC CPUs and graphics cards might be able to do it with a software update, but otherwise it means a replacement.

UHDTV from Broadcasting & Cable. H.265 news from Multichannel News via Zatz Not Funny.