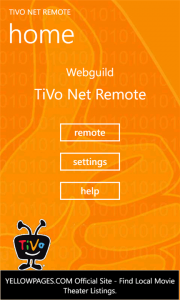 I’ve posted in the past about TiVo Commander, TiVoRemote, RCX for TiVo, and other apps for Android. And iOS, of course, has official TiVo app support, as well as third party apps like i.TV and DVR Remote. (Android users continue to wait for the promised official apps from TiVo.) And now Windows Phone 7.5, aka Mango, users have a TiVo remote control app of their own, the $1.99 TiVoNetRemote.

Like most of the other apps, TiVoNetRemote works with the TiVo Series3, TiVo HD, and the TiVo Premiere family via the Network Remote Control feature. Also like the other apps, it includes a keyboard for easy text entry, like the TiVo Slide Remote. If you have a Windows Phone that’s been upgraded to 7.5, or you buy one of the new 7.5 devices, and you have a TiVo, it is worth checking the apps out. And there is a free trial version if you can’t bear to part with two bucks.