Posted on Thursday, October 6, 2011 by MegaZone 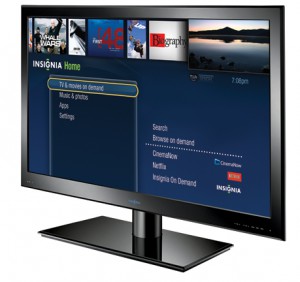 CNET has reviewed the recently launched Insignia Connected TV with TiVo Design, which mixed results. Overall they gave it 2.5 stars out of 5, and most of the knocks against it seem to have more to do with the TV itself than with the TiVo aspects:

The bad: The TiVo interface is essentially window dressing, using it can be annoying, and the search function only works for the Insignia On Demand service. The TV’s picture quality is characterized by unnatural color, uneven screen uniformity, and issues with 1080p/24 sources. It also has fewer picture adjustments than competitors.

Read the full review for more.

MegaZone is the Editor of Gizmo Lovers and the chief contributor. He's been online since 1989 and active in several generations of 'social media' - mailing lists, USENet groups, web forums, and since 2003, blogging.    MegaZone has a presence on several social platforms: Google+ / Facebook / Twitter / LinkedIn / LiveJournal / Web.    You can also follow Gizmo Lovers on other sites: Blog / Google+ / Facebook / Twitter.
View all posts by MegaZone →
This entry was posted in HDTV, TiVo and tagged Best Buy, CNET, HDTV, Insignia, TiVo, Video. Bookmark the permalink.
Performance Optimization WordPress Plugins by W3 EDGE